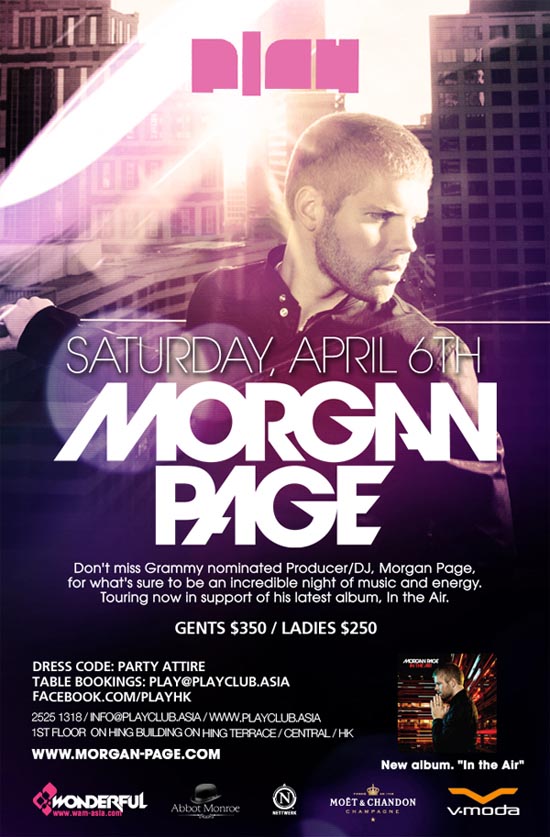 The brilliant Los Angeles based artist Morgan Page, will be spinning at one of the hottest club in Hong Kong- PLAY Club on Saturday, April 6th, 2013. Renowned for bringing his music of the perfect mix between kinetic house music and radio-ready pop, Hong Kong is set to love his style.

Since 2010, he has been working tirelessly which led him to his IDMA nomination for “Best American DJ (North America) together with Skrillex, Deadmau5 and Kaskade. Not only that, the talented DJ was also nominated twice for a Grammy for Deadmau5’s remix of Morgan Page’s single “The Longest Road” (Feat. Lissie) in 2009 and the “Best Remixed Recording” for the remix of Nadia Ali’s song “Fantasy” in 2011.

He has also played in some of the biggest music festivals such as Coachella, Electric Daisy Carnival, Electric Zoo, Nocturnal Wonderland, Spring Awakening Festival, DanceFestopia and Global Dance Festival. The busy artist has also produced remixes for artists such as Madonna, Katy Perry, La Roux, Florence + The Machine and Daft Punk.

With all his achievements, it will surely be a disappointment to miss such a talented and brilliant artist playing at PLAY on Saturday, April 6th. Come and enjoy the music and dance to the tunes of Morgan Page.