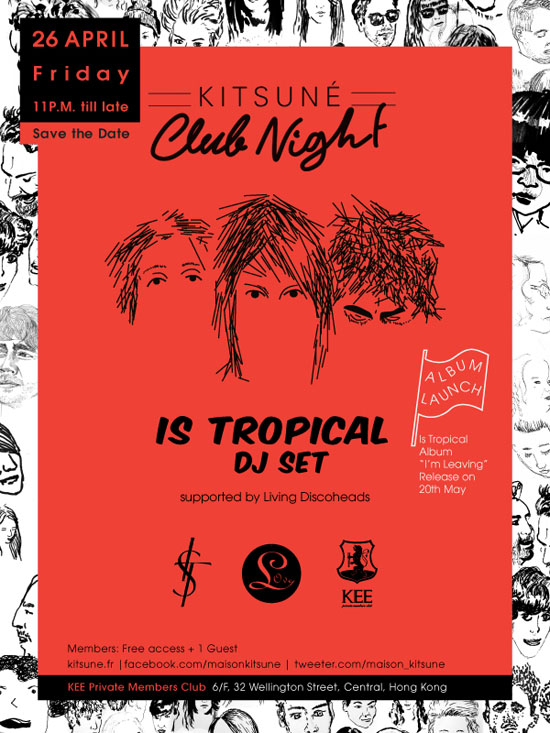 Having toured the world in support of their debut 'Native To',Is Tropical (Dominic Apa, Gary Barber and Simon Milner) return with ‘I’m Leaving’ - the bands new album for French record label Kitsune, due out 20th May 2013.

Whilst racking up enough hedonistic experiences to last a lifetime, Is Tropicalhavebeen busy learning some important musical lessons: namely, that 100mph craziness isn't necessarily all you need to make a record. 'I'm Leaving' marks itself out as a distinct progression from its predecessor. Produced by seasoned pro and friend of the band Luke Smith (Depeche Mode, Foals), ‘I’m Leaving’ is an album that rings with the buoyant spirit that brought Is Tropical to public attention in the first place, but also beats with an intrinsically human heart.

'Yellow Teeth', 'I'm Leaving's epic, seven-minute closer (released in February 2013 and currently available to listen to on YouTube) is an effervescent, understatedly hopeful number about a kid becoming a werewolf. With a full-on guitar solo, ‘Yellow Teeth’ is the kind of track that's built for anthemic crowd sing-a-longs rather than sweaty, tented raves.

Elsewhere on the album lies several more curveballs. 'Lovers' Cave' (penned about an actual 'lovers' cave' in France where a couple are thought to have been washed out on the tide) may be unashamedly buoyant, but it also brings the guitars to the fore more than ever before. 'Dancing Anymore', meanwhile, features a duet between Gary and his girlfriend – one of many tracks on the record that, again for the first time, feature a female vocal (the rest are provided by Crystal Fighters' singer Ellie Fletcher).'Toulouse' (written, unsurprisingly, whilst the band were in Toulouse) is proof that they haven't lost their old knack for a wonky pop ear-worm, whilst the “mental drums” of 'Cry' are pinpointed by the band as a future live favourite.

'I'm Leaving' will also give Is Tropical the chance to build on the global success of their Megaforce-directed video to 'The Greeks' (which, to date, has amassed nearly 3.5 million Youtube views and won a number of notable awards) with another Megaforce collaboration in the works with DOP Andre Chemetoff(MIA, 'Bad Girls', 'Born Free'). Then there's all manner of extensive touring ideas, including extending their already-vast list of destinations into territories as unexpected as Mongolia and Nigeria, and a summer of festivals to look forwards to. Between all these elements, what seems most obvious is that – far from just another late 2000s party band – Is Tropical have defied expectations and come out brimming with ideas.