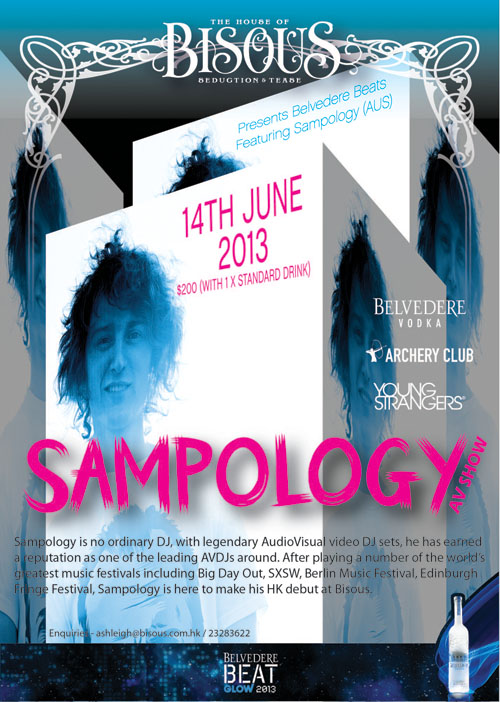 Belvedere Beat is back in HK for another amazing series of parties for 2013. This year’s Belvedere Beat party series features the theme Glow and the amazing work of famed photographer / light painter Conrad Atton will be seen throughout venues. Bisous HK is proud to present Sampology to take part in this amazing 2 month celebration of music, art & of course vodka! Sampology is no ordinary DJ, with legendary AudioVisual video DJ sets, he has earned a reputation as one of the leading AVDJs around. After playing a number of the world’s greatest music festivals including Big Day Out, SXSW, Berlin Music Festival, Edinburgh Fringe Festival, Sampology has finally made it to Asia and will be paying his exclusive debut set at Bisous.

He's unlike your regular artist releasing singles, EPs and albums, and touring live music venues and clubs around the world. (Although he does a lot of this too!) In 2011, Chris Lilley of Angry Boys/Summer Heights High fame hand-picked Sampology to produce an audio and video remix for S.Mouse on his Angry Boys Soundtrack release, and iconic Australian act The Wiggles came to Sampology as their go-to man for an audio and video remix on their 20th anniversary tribute album “ReWiggled”. Following his debut “Super Sounds EP” release in 2011 on Finland label Top Billin, Sampology released his debut album, 'Doomsday Deluxe' in June 2012 coinciding with his Super Visual Apocalypse tour, hitting the road in Australia and New Zealand in May and June before touring Canada in September 2012. The second single from Doomsday Deluxe, 'Around The Globe featuring Serocee' is released on Friday October 5, supported by a 14 date DJ tour across Australia and New Zealand in October and November.

Praise for Sampology
“Sampology makes me wanna breakdance” – Peaches
“...Sampology has turned spinning records into an art form as he combines sound and vision to create a multimedia sensation” - British Theatre Guide
"Sampology is dope as hell!!!...I mean not as dope as me, but dope enough..." – DJ Craze
"Seeing Sampology live made me reconsider the possibilities of what a DJ can do." - AC Slater
“Sampology is one creative dude.” - Yoda
“Sampology warmed up for me in Brisbane. The show was all the better for it - selection and technique was on point. It’s not often that I’m really really into the DJ before me this much but I was really impressed.” -Sinden