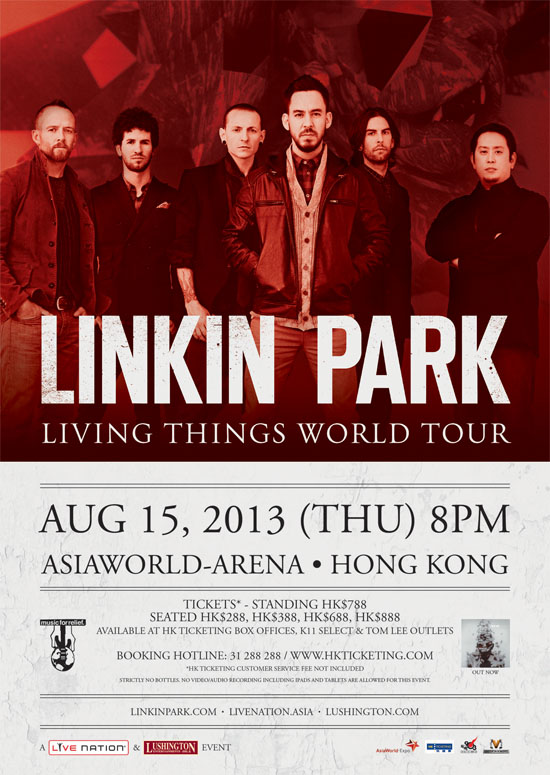 With the critical and popular success of Linkin Park’s brand new LIVING THINGS WORLD TOUR, Live Nation and Lushington Entertainments are pleased to announce that by popular demand, Linkin Park will make their triumphant return this summer to perform the Hong Kong leg of their tour on August 15 (Thursday) at AsiaWorld-Arena.

Linkin Park is a Grammy-Award-winning, multi-platinum alternative rock band comprised of co-lead vocalist, Chester Bennington, drummer/percussionist, Rob Bourdon, guitarist Brad Delson, bassist Dave 'Phoenix' Farrell, DJ, programmer Joe Hahn and Mike Shinoda - co-lead vocals, keyboards, guitar. The band has sold over 50 million albums worldwide, and is the biggest band on Facebook - with over 52 million fans and counting. In the span of time since 2000, when Linkin Park debuted on the Billboard 200 – no other artist has had more top 10 singles on the Alternative chart and, with the release of their latest album, LIVING THINGS (Machine Shop Recordings /Warner Bros), which reached #1 in over 20 countries, no other band has achieved more #1 albums this century.

In 2005, Linkin Park founded Music For Relief, a non-profit organization dedicated to providing aid to victims of natural disasters and the prevention of such disasters. Since its inception, Music For Relief has raised over 5 million dollars for victims of multiple disasters across four continents. The organization was recently recognized by UN Secretary-General Ban Ki-Moon for the Download to Donate program to raise funds and awareness in the aftermath of the Haiti earthquake. In recognition of its humanitarian work, Linkin Park received a Global Leadership Award from the United Nations Foundation.

In addition to their Summer Sonic Festival dates - August 10 in Tokyo, and August 11 in Osaka, Linkin Park is ready for a spectacular reunion with all Hong Kong fans on August 15 at Asia-World Arena. For further information, please visit: www.linkinpark.com.