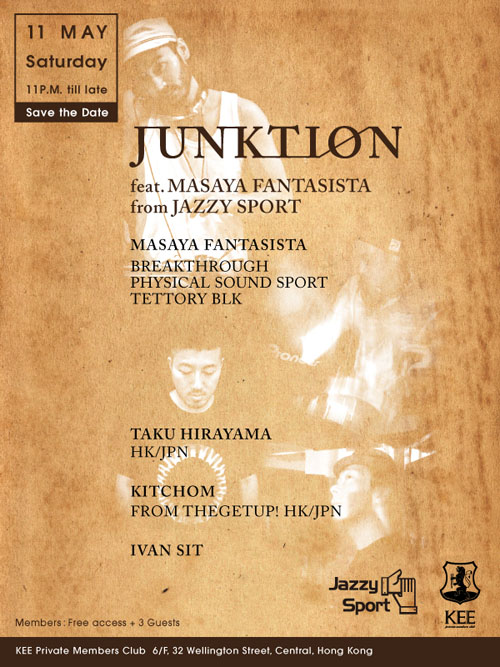 Captain (a.k.a. CEO) of Jazzy Sport. Masaya is a living representative of the soul of Jazzy Sport. Spiritually free, borderless, simple but unique yet still keeping that b-boy stance. His love for music started from playing the piano at a young age. Heavily influenced by living the surrounding of Jazz music, Masaya gradually found the same vibe and dopeness into early 90's Hiphop.
After spending 4years DJing at on...e of the well known spots in Morioka City "DJ Bar Dai", he came back to Tokyo and joined one of the pioneer street / dance music label "File Record" in Japan upon graduation from university. He established "Jazzy Sport" in 2001 and started to dig out talented cats now known worldwide like DJ Mitsu the Beats and Cro-Magnon. Masaya himself continuously create new vision and sound with numerous collaborations with fellow artists such as “Breakthrough” (DJ Jin from "Rhymester" / Ladi Dadi / Freedom Chicken from "14Catherine" / Masaya), “Physical Sound Sport” (Ladi Dadi / Okuda Spa / Masaya) and the production team “Tettory BLK” (Simbad / Grooveman Spot / Masaya).
On the "Sport" side of thing, Masaya has been as live as his label has been. In 2006, he won the championship on Adidas futsal tournament in Japan and finished 2nd Place in the world title. Masaya has done a collaboration tour with Japan's own ski brand “Vector Glide” and has been a contributor to the promoting of “Mountaineering” in Japan, hosting DJs at the national climbing championships. He has been a live representation of "Jazzy Sport" and a true definition of a “creative athlete”.

Originally conceived as a record store in Morioka City, Jazzy Sport has become a Japanese hub for hip underground beats since opening its flagship store in Tokyo since 2003. Sought out by visitors from around the globe, the world-renowned boutique record store doubles as a headquarters for Jazzy Sport's ever-growing roster of DJs, MCs, producers and designers. In addition to breaking homegrown artists like Grooveman Spot, Gagle, Breakthrough, Cro-magnon, Budamunk, Marter and (仮)Albatrus, Jazzy Sport have released a steady stream of collectible records by cult international artists including Count Bass D, Sa-Ra Creative Partners, Steve Spacek and IG Culture's New Sector Movements. One of the most respected crews in the world with some of the finest talents and future legends.
http://www.jazzysport.com/

After stepped into the 90's club scene in Fukuoka, south-west region in Japan, Taku Hirayama has been on decks since 2000. Relocated himself to Hong Kong in 2006 and has played at most of everywhere in city until 2010. Back to home in Japan and spent for a few years with homies and underground dance music party.
In this few years, he's played with various international DJs like Prins Thomas, Rub N Tug, DJ Cosmo, Tiago, Ame, Edit-Select, Surgeon, DJ Muro, grooveman Spot.
In 2012, traveled around SE Asia after seeing total solar eclipse in Australia, decided to come back to HK once again. Mixing up underground disco, house and techno as well as diverse quality music to create deep and hopeful atmosphere on dancefloor.
https://soundcloud.com/taku-hirayama