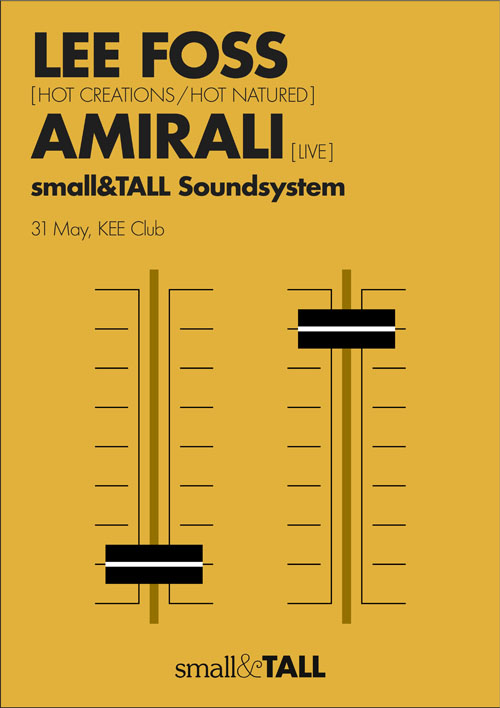 
small&TALL is proud to present two of the fastest rising stars of the house music underground.

LEE FOSS (Hot Creations)
Few DJs have made such a dramatic impact on the underground house and techno scene over the last two years as Hot Creations label owner Lee Foss. Described by DJ Mag as “one of the most talented new forces in modern dance music today” and by fellow future house innovators Art Department as their favourite producer, Lee has quickly catapulted himself into dance music’s collective consciousness. Lee and his Hot Natured partner Jamie Jones currently spearhead a whole family of like-minded producers that includes Robert James, Russ Yallop, Richy Ahmed and most recently Danny Daze who are re-writing the rulebook of how to make evocative and emotive house music.

Born and raised in Chicago, the birthplace of house, Lee now lives between London and Los Angels. Lee made his name on both sides of the Atlantic playing at clubs like The Standard Rooftop (Lost Angeles), fabric (London), The Marcy Hotel (Brooklyn), Watergate (Berlin), Spybar (Chicago) and DC10 (Ibiza). His rapid rise to prominence has been as much down to his unified but all-encompassing approach to DJing as it has to his pioneering take nu school house and synth-heavy techno, backed up by a string of hit releases on labels like No 19, Culprit, Wolf+Lamb and his own Hot Creations imprint.

AMIRALI (Crosstown Rebels)
Following the release of his "In Time" LP on Crosstown Rebels last year, Amirali has received much critical acclaim. Described by Resident Advisor as "an example in perfect craftsmanship" his ascendance has been incessant. His avant-garde concoction of electronica, techno and house and seen him win a legion of followers across the globe and has also seen people like MK, Deetron, Appleblim, Deniz Kurtel all lend their adept hand at remixing this highly talented, forward thinking individual. His tour diary reads like a who’s who of the world’s best clubs and festivals.

In terms of what's next, Amirali has plenty up his sleeve. He is currently hard at work in the studio prepping and priming his second full LP for Crosstown Rebels, this second foray into the world of the artist album promises to be a departure from "In Time" yet will undeniably retain his ubiquitous style, his individuality and his uniqueness. He has also begun an onslaught on dance floors with his record bag at the ready in clubs around the world. Seemingly, Amirali has found more hours in the day that is humanely possible to balance so many projects with such ease and prowess and it is evident that Amirali is definitely on the right path to great things, as a DJ, a performer and a vocalist.

Amirali will be performing a special live show - our first at KEE since Guti killed it in January after our Nico Jaar and Apparat gig. Don't miss this!

small&TALL SOUNDSYSTEM
Upstairs, downstairs, our residents 2GWEILOS, SWAMY and WENDY WENN will fill in all the gaps between our guest acts.

Get your advance tickets here quick, this one will be a sellout!
http://amirali-leefoss.eventbrite.com/