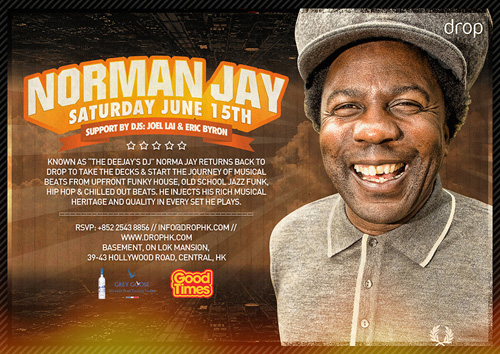 Known as “the deejay’s DJ” Norma Jay returns back to Drop to take the decks & start the journey of musical beats from upfront funky house, old school jazz funk, hip hop & chilled out beats. He injects his rich musical heritage and quality in every set he plays.

One of the finest & most respected DJ's in the world today whose talent and dedication to a music career spanning well over two decades has earned him an MBE medal by Her Majesty, Queen Elizabeth II in 2002.

Jay played at most of the seminal New York venues including the legendary Paradise Garage, which was the beginning of an amazing career. In the late 70s, he built the now legendary GOOD TIMES SOUND SYSTEM. His 'The Original Rare Groove Show' on Kiss 94fm led directly to the emergence of the cult late 80's underground dance phenomenon 'rare groove' scene that swept UK. With Judge Jules they mixed urban soundtracks from the 70's & 80's with the brand new sound coming out of Chicago and New York - the sound of HOUSE music!

In the 90s, he co-established the club 'High On Hope' introducing unknown US DJ's & dance divas such as Louis Vega ,Chaka Khan & En Vogue to the UK scene.

With the global rise in interest in UK dance culture, Jay quit and returned to his first love - DJing. With countless awards, accolades and albums under his belt, now he is simply touring the world bringing his style to parties, clubs and festivals and of course in Drop!