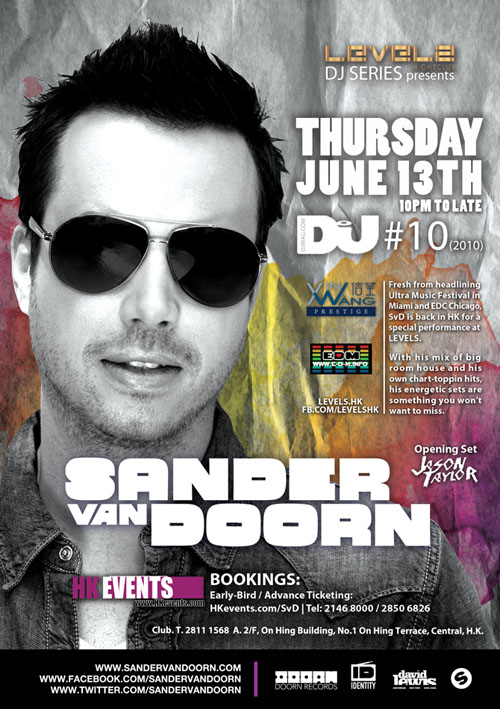 Save the date, and stay tuned for further info...

This one Superstar DJ Headlines the MAIN STAGE of the biggest Music Festivals in the World, including EDC, Ultra, EZoo, Tomorrowland, and many others! One of the highest profile, most respected DJs and Producers in the Planet! Needless to say, he has Won countless Awards. HK get ready, we're gonna shake things up with the best of what Dance Music has to offer!

March 2008 saw Sander win an award for 'Best Breakthrough DJ' in the International Dance Music Awards [IDMA] at the Miami Winter Music Conference in 2008 (beating the likes of Calvin Harris, Deadmau5 and Axwell of Swedish House Mafia). His track "Riff" also received a nomination as the best "Underground Track".[2] Sander is also one of the few DJs who has won/earned the coveted Dutch Silver Harp award. Numerous of Sander's songs have hit #1 on Beatport and many other charts.

Notable artists he has done remixes for include Lady Gaga, Sia, The Killers, Swedish House Mafia, Depeche Mode & many others. He also did a collaboration with Robbie Williams.

Those who experienced Sander's amazing performance at the W Hotel in HK few years ago to a corner to corner packed crowd, expect a minimum of that quality show x 2. Sander is preparing a very special exclusive set for HK!

Jason has not only co-produced tracks with The World's Greatest DJ - Tiësto, but also, opened and/or closed for Tiësto, DeadMau5, Calvin Harris, Avicii, Martin Solveig, A-Trak, Zedd, Roger Sanchez, Hardwell, and many other respected industry leaders... And played at the best venues in the World, including, PACHA, Wynn/Encore - Las Vegas, W Hotel, Harrah's & MGM Casino, etc. Flying in all the way from New York City, Jason will play the best of the American Dance Music scene, House, Electro & Mashup.

We are very proud to announce, we have just confirmed several leading sponsors highly excited about supporting this event (of many happening in HK) as one of the best. With this cash sponsorship, we would like to pass it back to YOU! Very special priced Early-Bird Tickets available LIMITED QUOTA, grab them while you can!