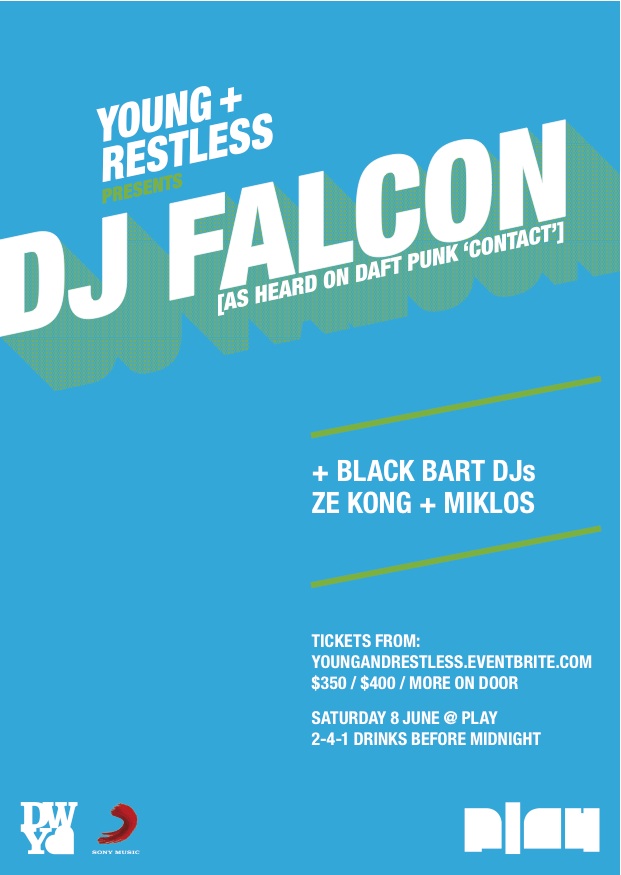 DJ FALCON
Stephane Queme is also known as DJ FALCON. the French legend who has famously co-produced with Thomas Bangalter (DAFT PUNK) and signed on the French record label Roulé.

Falcon has been contributing remixes for many artists such as PHOENIX and CASSIUS (LA MOUCHE) and has since 10 years been touring around the world playing alongside CHEMICAL BROTHERS "South American tour", DAFT PUNK "Alive Tour", and with his friends from ED BANGER and KITSUNÉ. His DJsets are inspired by a touch of electro, old school, house classics, indie dance and new rave.

As a DJ he has played all across the world at almost every prestigious club you can imagine from PACHA & PRIVILEGE IBIZA, FABRIC LONDON, REX PARIS, COCOON FRANKFURT, WOMB TOKYO, MIAMI WMC and he has several times been touring Australia and US.
Since 2010 Falcon is resident at Social Club in Paris with Alan Braxe for "Vulture Music Presents...".

YOUNG + RESTLESS
A new nightlife experience / experiment for those who don't want to stay in, or stand still. Bringing you the best artists from the worldwide French house / indie dance / electro scene, every party will be a different experience: evolving, improvising, crossing boundaries...never boring