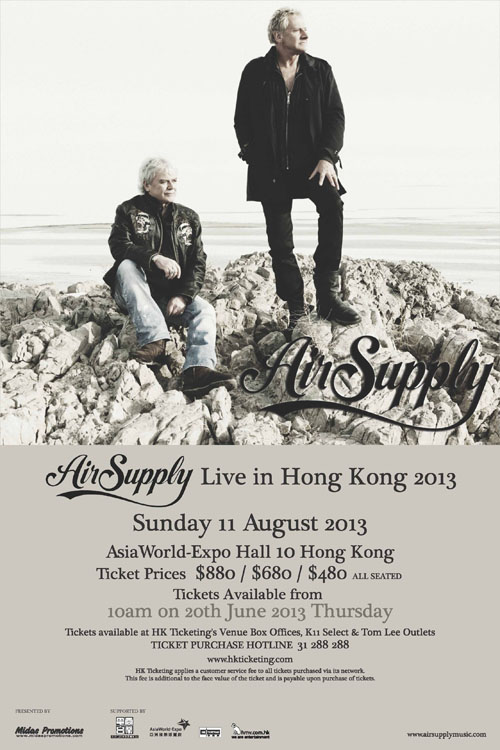 The Legendary British-Australian pop rock hit-making duo, Air Supply is bringing its powerful signature sound to Hong Kong for a live concert. The one night only performance Air Supply Live in Hong Kong 2013 will be held on 11 August 2013 at AsiaWorld-Expo.

Formed in 1975 with guitarist and singer-songwriter Graham Russell and lead vocalist Russell Hitchcock, Air Supply had a succession of hits worldwide including “Lost in Love”, “Every Woman in the World”, “Even the Nights Are Better” and “All Out of Love”. The albums Lost in Love, The One That You Love, Now & Forever, and The Greatest Hits sold in excess of 20 million copies with “Lost in Love” as the Song of the Year in 1980. The trademark sound of Russell Hitchcock’s soaring tenor voice and Graham Russell’s simple yet majestic songs created a unique sound that would forever be known as Air Supply.

However, it is the live shows that always hold audiences captive around the world. Air Supply was one of the first Western group to tour China, Taiwan and countless other countries that before would not allow pop music across their borders. In 1983 they recorded “Making Love Out of Nothing At All” which was released on The Greatest Hits album, solidified the group as a permanent force in modern music.

Not only did they spend their time in the recording studio and toured the world extensively in the 80’s and 90’s, both Hitchcock and Russell took time off for solo projects too. In July 2005, Air Supply celebrated their 30 years of success around the world with the launch of their live DVD It was 30 Years Ago Today as they smashed attendance records of playing to 175,000 people at one show in Cuba.

In 2011, the duo continues to play more than 150 shows a year worldwide including stops in England, Ireland, Israel, Philippines, Korea, Japan, Canada, the U.S. and beyond. Air Supply is set to rock the stage with their romantic pop songs and fans should not miss this opportunity to capture their amazing live performance again. Brought to Hong Kong by Midas Promotions, Air Supply Live in Hong Kong 2013 will be held on 11 August 2013 at AsiaWorld-Expo. Tickets are on sale from 20 June 2013 at HK Ticketing’s Venue Box Offices, K11 Select and Tom Lee Music Stores. Ticket purchase hotline: 31 288 288, www.hkticketing.com.