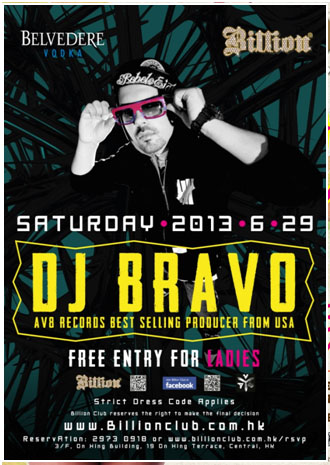 Return for a smashing hour in and break the house down in Billion Club.

Hong Kong celebrity’s favorite DJ Bravo is getting ready to play his signature sound – the sound that gets the crowd into frenzy. DJ Bravo - the AV8 Records Best-selling Producer &Remixer, he is an iconic figure in Asia’s most dynamic nightlife scene and a member of the world renowned Bum Squad DJ crew. It’s difficult not to walk into a club without hearing his handiwork coming out of the speakers. From his humble beginnings on the street in New York, he has taken his sound worldwide by performing in different exotic locales with his trademark style, quick mixing, scratching and remixing LIVE.

DJ Bravo has the sound you want and performance you need. His musical style is eclectic and versatile; putting him at the forefront of a new generation of DJ’s bringing that Hollywood/Vegas multi-genre party flavor. Perhaps that’s the reason to makes him being one of the Asia’s most-requested party rockers, and even take place at celebrities’ private events.