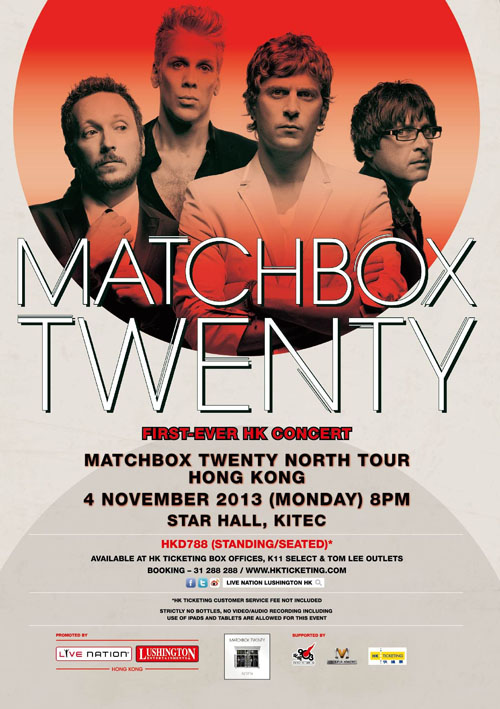 Live Nation Lushington is proud to announce American rock band, MATCHBOX TWENTY, will be touring Asia for the very first time since 1995. The multi-platinum selling band will perform on 4th November 2013 at Star Hall, KITEC. Tickets go on sale at 10am on Thursday, 27th June 2013.
MATCHBOX TWENTY are Rob Thomas, Paul Doucette, Kyle Cook and Brian Yale. Formed in Florida, the band entered the world with a blockbuster -- 1996's YOURSELF OR SOMEONE LIKE YOU. The debut set spawned five hit singles -- "Push”, "3 am," "Real World," "Long Day" and "Back 2 Good" and snagged an RIAA Diamond Award certification for U.S. sales exceeding more than 12 million to date. Thomas also raised the band's profile by co-writing and singing on Santana's Grammy Award-winning 1999 smash "Smooth." Matchbox Twenty maintained the momentum with MAD SEASON in 2000 and "MORE THAN YOU THINK YOU ARE in 2002, both of which went multi-platinum and continued to spit out hits such as "Bent," "Unwell," "If You're Gone," "Bright Lights" and "Disease."

But after three albums of hard work and equally hard touring, MATCHBOX TWENTY was ready for a break. Thomas released a pair of Top 5 solo albums which contained several #1 singles, Doucette worked with his band The Break and Repair Method and wrote film music, while Cook led the New Left. The hiatus not only renewed MATCHBOX TWENTY as a band but also seasoned the individual members even further as they came back together for 2007's EXILE ON MAINSTREAM, a greatest hits collection that sported six inspired new tracks which were co-written by the band for the first time ever and included their biggest selling single to date “How Far We’ve Come”.

In addition to more than 30 million records sold worldwide, MATCHBOX TWENTY has also earned countless accolades, including five Grammy nominations, four American Music Award nods, the 2004 People’s Choice Award for “Favorite Musical Group, and they were named “Best New Band” in the 1997 Rolling Stone Readers Poll. What’s more, Rob Thomas has proven one of the most highly decorated artists of recent years, receiving three Grammy Awards, 11 BMI Awards, and two Billboard “Songwriter of the Year” honors for both his charttopping solo work as well as collaborations with such legends as Santana, Mick Jagger, Willie Nelson and Big Boi. Thomas’ collaboration with Carlos Santana on “Smooth” was also named the #2 Most Popular Song Ever
on Billboard’s List of the 100 Most Popular songs behind “The Twist.” He was also named to Billboard’s Top 20 List of Hot 100 Songwriters 2000-2011 at #5 and was the top ranking artist/songwriter on the list.

"Matchbox Twenty existed a lot as a vehicle for Rob's songwriting in the beginning," Doucette explains. "Through the years Kyle and I have slowly started to write more and more songs. When we got back together we wanted to reflect that within the band." Thomas acknowledges that the more collaborative method was "weird" for him at first. But the quality of the jointly written material made it easy to embrace the new path."

After EXILE ON MAINSTREAM's Top 5 success, MATCHBOX TWENTY continued the collaborative process as it headed towards their fourth album, NORTH. “North” is the quartet's first release in five years, its first set of all-new material in a decade, and, perhaps most rewarding, the first album to debut at #1 in the band’s highly decorated career. And like other connotations of the word, the 12-song set represents a determined journey, a carefully considered path that combines earnest melodicism with sly and even snarky fun as well as a new internal world order that has made MATCHBOX TWENTY a tighter and even more collaborative band than ever before in its 17-year career.

NORTH finds MATCHBOX TWENTY honed and fine-tuned, from the roof-raising arena-sized anthem "Put Your Hands Up" to the kinetic beat of new single "Our Song" to the rich craft of "Overjoyed” and "Parade”. "English Town" and "I Will" are the group at its balladic best, while Thomas thinks "Like Sugar" “sounds almost like a Dr. Dre tracked mixed with our band, really fresh." And then there's "She's So Mean”, NORTH's high-energy, harmony-laden lead single which marked the band’s triumphant return with a top 10 charting. Kyle Cook took lead vocals on the incredible ballad "The Way”, which he and Doucette penned together.

NORTH has sent MATCHBOX TWENTY back out on the road for the first time since EXILE ON MAINSTREAM, which saw the band playing SRO shows to their biggest crowds ever around the globe. The response has been overwhelming -- the group already has back-to-back sold out tours through North America and Australia under their belt, and will be embarking on another headlining tour of arenas and amphitheaters across North America this summer, beginning at the Verizon Wireless Arena in Manchester, NH, on 25th June.

"Matchbox Twenty is pretty all-encompassing," Doucette says. "Once it gets rolling, we just devote all our time and energy to that. I can speak for everybody on this; it's the thing we hold the most dear because it's the thing we built the longest, so we want to give it its due. We don't make records that often anymore, so when we do we want to devote our time and energy to not only doing it; but also bringing that music to the fans." Hong Kong fans will now get the chance to experience their blockbuster album and all their classic hits live for the very first time on 4th November at Star Hall, KITEC.