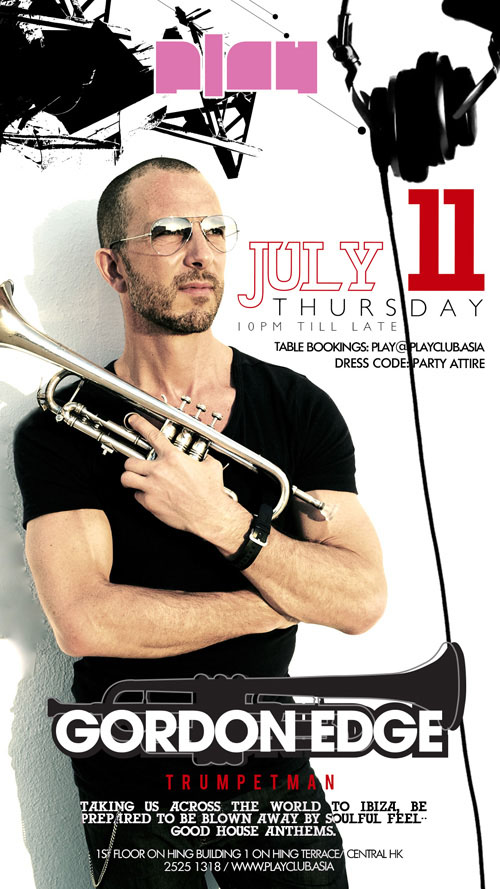 Gordon Edge, AKA Trumpetman will be at PLAY on Thursday, July 11th, 2013 to party.

A unique brand of brass-tinged, feel-good house, Gordon Edge has made his way into every major club in Ibiza appearing in Pacha, Space, Amnesia and Privilege. Starting off solidly, creating a base, shifting through the gears, teasing, releasing, fading and flowing all the meanwhile creating an epic climax, each Gordon Edge set is a unique experience. His music is influenced by tribal, soulful house, jazz flava’s and the right volume of Balearic anthems.
Spinning worldwide in Spain, Ukraine, Germany, Kazakhstan, Bahrain, Dubai, Egypt, Austria, Switzerland and China. Moreover, Trumpetman has traveled to Russia, South America and India where he was asked to play at the GQ Magazine launch in Mumbai.

A few of his highlights include ‘Edge *1-Compnded’ (1992); ‘Gordon Matthewman-Itza Trumpet Thing’ (1998) and ‘Gordon Edge- Set Your Body Free/Trumpet Funk’, released on Eric Morillo’s award winning Subliminal Label.
Witness Gordon Edge, the Trumpetman and his unique house music at PLAY for one night only!