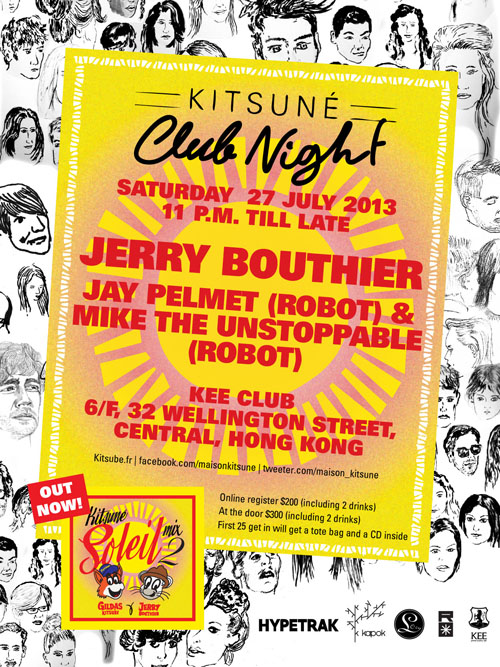 Jerry Bouthier, KCN branding, Fashion style . Chic trendy groovy style
His ties with Vivienne Westwood, Kitsuné, BoomBox/Ponystep etc have made his name a fixture in the fashion world and beyond, from London to Paris, Milan to Tokyo.

Blending electro, disco, pop, rock, balearic (and everything else in between) in one continuous uplifting mix the restless Frenchman boasts an insatiable enthusiasm when it comes to giving people an unforgettable time on the dancefloor or whilst listening to his exciting mixes and fashion shows’ soundtracks.

Since 2002, tinkering with lots of wires and various electronic devices has led to the creation of original Robot tracks. Components of these have been re-worked into a live set; utilizing sequencers, midi control surfaces and synthesizers - the result is a highly charged and unique live show.

Taking a break to focus on Clockenflap Music & Arts Festival, Jay & Mike (deserted by fellow Roboters) are once again back on the DJ horse. As ever - championing deep and funky techno for which ROBOT is well known and loved. The scene has evolved greatly in the past few years – and it is with great delight that they don their headphones once again.