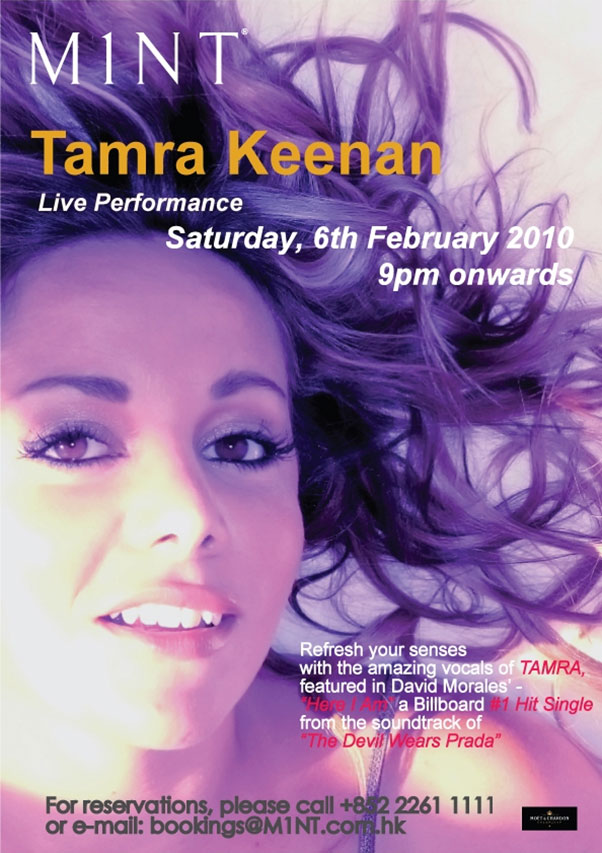 Electro music enthusiasts gets a special treat to the ears with the vocal talents of Tamra Keenan with two special appearances at M1NT – Hong Kong on 4th and 6th of February 2010.

After countless nights of the same commercial tunes in every venue, it’s time to refresh your senses with the vocals of Tamra Keenan from London.  Tamra’s vocals have been critically acclaimed by various music magazines like: DJ Mag, The Face, NME, Mixmag and M8 with her debut album “Suite Beat Boy”.  Soon her career was followed with the recognition of trance legend BT to feature her vocal talents with the track “Love in a Time of Thieves”.

With huge success, gaining mainstream attention from the music scene, Tamra collaborated with progressive house master David Morales and a remix version from Kaskade with the track “Here I Am”, a Billboard dance chart number 1 hit single which was featured in the motion picture soundtrack “The Devil Wears Prada” and then recently in “The Beautiful Life” on a CBS series.

Tamra is in popular demand as a top line writer, collaborator and an artist with her soothing, sleek and pleasing vocals.  Awaken your senses and feel electro music in a refreshing way with Tamra Keenan’s tunes in February at M1NT – Hong Kong.

About M1NT – Hong Kong
Opened in November 2006, M1NT Hong Kong is located at Henderson Land’s premier development CentreStage at 108 Hollywood Road, Central.  The club spans over 6,000 square feet.  With HKD$23,000,000 of equity capital, a modern day members club was built by M1NT Design.  M1NT Hong Kong has a capacity to cater to 350 guests and includes private areas.  Since opening, M1NT Hong Kong has catered to Hong Kong’s elite offering unique nightlife and entertainment to 340 shareholders and with over 1,000 members.