The Killers Live in Hong Kong 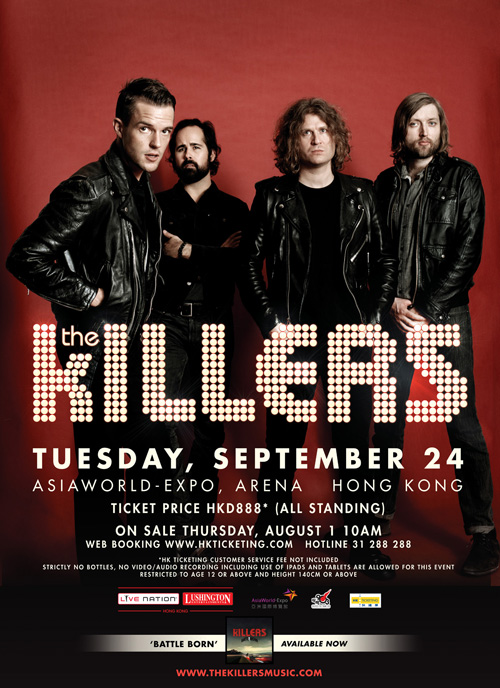 Live Nation Lushington (Hong Kong) is exhilarated to announce that The Killers will be performing at the AsiaWorld-Expo, Arena on Tuesday, 24 September for the very first time in Hong Kong.

The multi-platinum, NME Award-winning, Grammy-nominated band from Las Vegas was formed in 2002 and shone in the indie scene in 2003 with their smash hit Mr. Brightside.  The Killers consists of Brandon Flowers (vocals, keboards), Dave Keuning (guitar), Mark Stoermer (bass), and Ronnie Vannucci (drums).  Part of the post-punk revival movement, the band draw their influences from music styles of the 1980s.  Released in 2004, debut album Hot Fuss brought them huge mainstream success and critical acclaim. Their second album, Sam's Town, was released in 2006 and it won Best International Album at the 2007 BRIT Awards where the band also took home Best International Band Award.  Their third studio album, Day & Age, produced by Stuart Price, was released in 2008.  The Killers have sold over 15 million copies of these three albums, performed in countless countries and become one of the world’s biggest rock ‘n’ roll bands in the process. Following their precedent success, Battle Born was released in 2012. The album is their fourth consecutive number-one album in the UK and Ireland.

The Killers have forged a reputation as one of the best live bands in the world and will be staging their performance in Hong Kong for one night only. Don’t miss this much-anticipated, first-ever spectacular show that The Killers is bringing to us!


Please visit www.thekillersmusic.com for more information on the band.