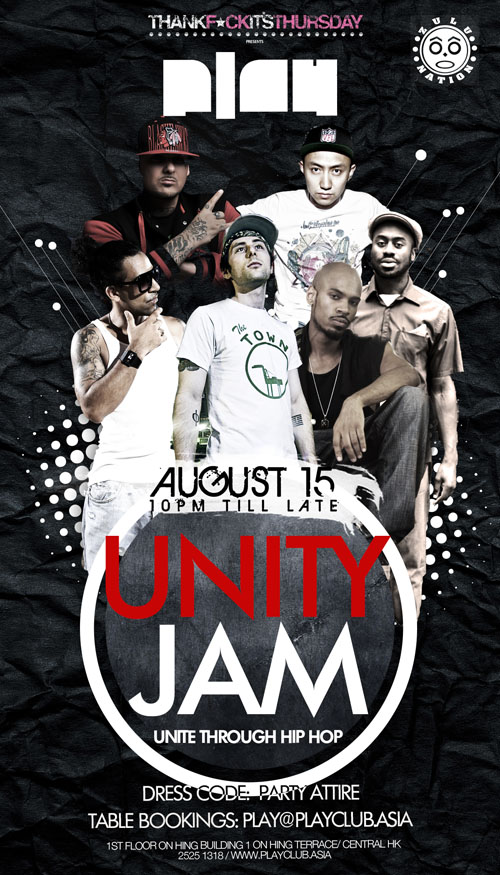 Unity Jam is a Hip-Hop gathering to further educate and grow within the Hip-Hop community. Unity through Hip-Hop is what Unity Jam is all about. Originally begun by the Shaka Zulu Kings, Unity Jam Asia consists of 4 DJs: DJ Wordy, DJ Don Martinez, DJ Enso and Yao, who will be spinning proper Hip-Hop all night long, along with MCing and a live performance from EKORB. Come to PLAY on Thursday, August 15, 2013 for a truly unique musical experience!

Unity Jam provides a non-biased platform for learning more about the genre that led to the Zulu Nation. This is about music, art, and culture; not about glorifying violence, money, or guns. The five elements of Hip-Hop will be on full display: DJ, MC, B-Boy (breakdancer), Graffiti, and Knowledge.

Unity Jam’s musical performers include DJ Wordy, the 3 x China DMC Champion and China’s first ever international DJ star. A true pioneer who has traveled the world showcasing his turntablist skills and is currently on tour with Dr. Dre and Kendrick Lamar; DJ Don Martinez, the multi-genre French party-rocker and mixtape producer, famed for his annual Cannes appearances with artists such as P.Diddy, Busta Rhymes, and Pharrell Williams. MC EKORB aka Nick Cage, a Tampa Bay, USA performer well-known in the SE Asia underground Hip-Hop scene who has MCed with the likes of DJ Shortkutt and Q-Bert. DJ Enso, founder of the Solos Records music label and Hong Kong's infamous XXX Gallery who has played alongside internationally-known DJs Steve Aoki, A-Trak, and Craze; joining DJ Enso is Yao, whose musical palette ranges from Hip-Hop to soul to electronic music and who has shared the stage with Tyga, Diplo, and De La Soul.

On Thursday, August 15, Unity Jam will be reintroducing the world of Hip-Hop to Hong Kong, where music is poetry and the art-form returns to its roots.
Only at PLAY.