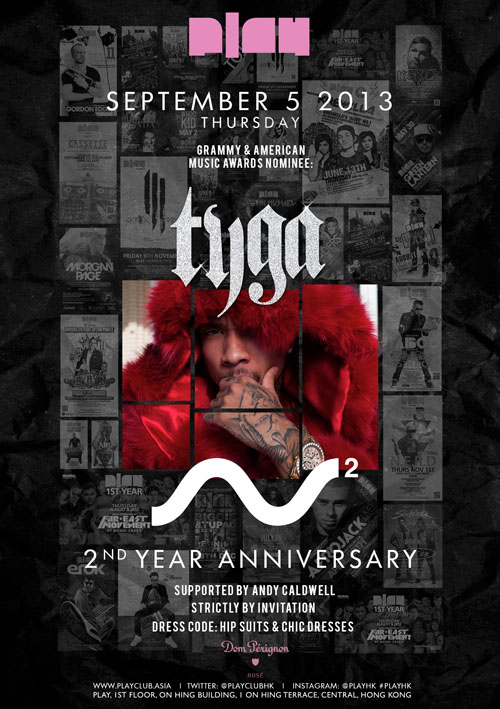 On Thursday, September 5th, PLAY is going all out and inviting you to celebrate the mark of its 2nd Year Anniversary! Guests can expect a new and improved Rosé Room, star-studded celebrity attendance and a heart-thumping performance you would not want to miss!

The PLAY lounge will re-open as the Rosé Room, featuring Moët &Chandon Rosé with Hip Hop beats to match. Await to be surrounded with the best A-list crowd in Hong Kong, alongside celebrity-status performers, including Grammy award nominated electro DJ Andy Caldwell that will get you moving and keep your night pumped &entertained.

This year's super celebrity guest is the highly acclaimed nominee for the Grammy Awards, American Music Awards and the BET Awards; Vietnamese-Jamaican artist TYGA. He will be flying in for the first time to Hong Kong to celebrate PLAY’s 2nd birthday! TYGA sky rocketed to fame after his hit release “Rack City” followed by “Faded”, “Switch Lanes” and more. Standout performances on Young Money’s “We Are Young Money” album (notably on the singles “BedRock” and “Roger That”) and Chris Brown’s “Deuces”. Famous collaborations with high acclaimed Hip Hop artists include Lil Wayne, Chris Brown, Rick Ross, and 2 Chainz to name a few.