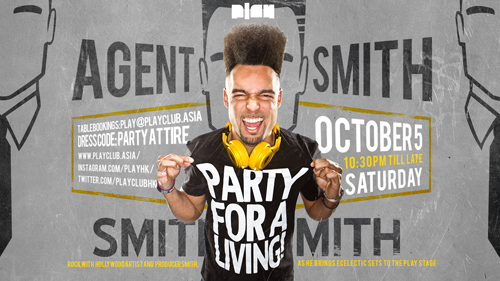 Got a song request at a club you’re dying to get played? On Saturday, October 5, 2013, you will get the chance to do just that and have your song mashed up by skilled DJ, SmithAgentSmith at PLAY!

The Hollywood-based artist is known as a deejay, producer and a live remixing pioneer. SmithAgentSmith puts together sets that are as fluid as they are eclectic. With the setup he created with Ableton Live, SmithAgentSmith is able to remix tracks instantaneously, create new mash-ups and maneuver between songs, tempos and genres effortlessly. What distinguishes him from others in the industry is that he is able to create brand new mash-ups out of song requests. To Smith, he sees it as an opportunity to create something new as oppose a hassle.

Brainchild of former djDOYOU, Smith gained millions of views with his hilarious videos and a #1 rank on Hype Machine’s ‘Popular’ chart. In addition to that, Smith had also launched his ‘Slow Your Roll’ Mixtape release party with SkyBlu of LMFAO at Surrender (Las Vegas).

His unique ability and raw talent to create high quality content will ensure his success in the industry in the coming years. Get ready to be in awe by SmithAgentSmith at PLAY on Saturday, October 5, 2013!