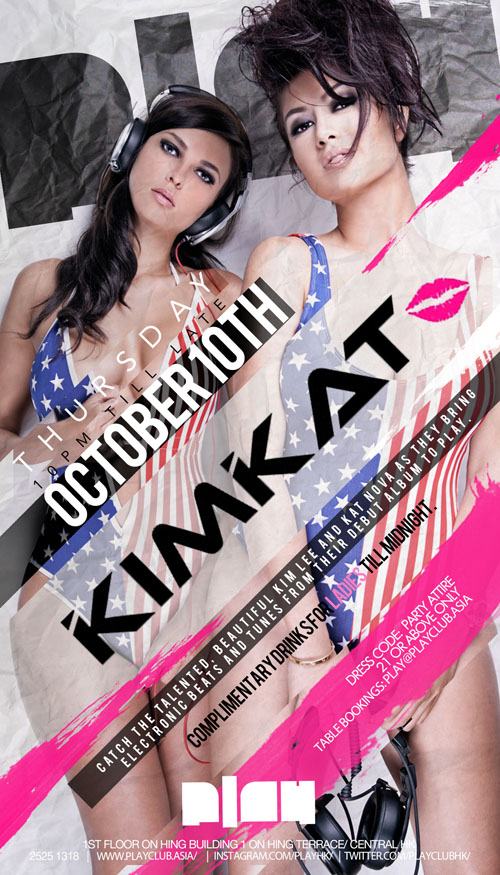 The beautiful and talented ladies of the DJ duo KIMKAT consisting of Kim Lee and Katrina Nova will be at PLAY on Thursday, October 10th, 2013! Their unique electro sets with additional spins in the Heavy Trans, EDM, Hip-Hop and Top 40 genres is sure to capture your musical heart.

Having met each other in 2007, the pair has been inseparable since. Vietnamese and French, Kim Lee started her career before becoming a DJ as a model and actress whereas Russian beauty, Katrina Nova wanted to pursue a career in finance. Kim Lee has appeared in numerous magazine covers such as OK! Magazine, Maxim, Maxim Indonesia, Elle Magazine, Style Magazine, FHM Russia, Romania, Singapore, Philippines, Thailand and Malaysia. Kat Nova has been on several runaways in Europe for many years and when she’s not strutting the runway, she can be seen as an actress on shows NCIS Los Angeles, Dexter, Two and a Half Men, The Mentalist, Castle and The Glee Project.

They started their DJ career by attending Scratch Academy together in Los Angeles California and as quick learners and with their edginess and beauty; they captured the attention of The Black Eyed Peas’ Apl de Ap. He began to personally endorse them upon realizing their potential.

Working with Brian Kennedy, the man behind Rihanna’s ‘Disturbia’ and Chris Browns’ ‘Forever’, KIMKAT is set to release their much anticipated first album in October 2013.

The kindhearted DJ duo, DJ KIMKAT also works with charities for victims of the tragedy in Japan, children from abusive homes and battered women now in shelters. Catch the talented, beautiful and kindhearted DJ KIMKAT, Kim Lee and Kat Nova at PLAY on Thursday October 10th, 2013!