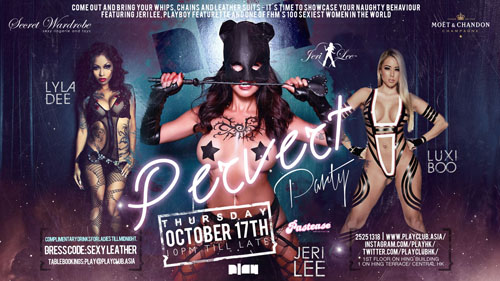 Arrive and expect to be seduced by the enticing atmosphere, party with the naughtiest and get ready to feed your curiosity. We have flown in the most provocative performers to entertain throughout the night - featuring Jeri Lee, Hot Import Model, Playboy featurette and one of FHM's 100 Sexiest Women in the World, dancing along-side with Gogo-gadgets Filipino-Irish Model Luxi Boo & Cambodian/Indian Actress Lyla Dee on Thursday, October 17, 2013.
The half Filipino half Mexican glamor model Jeri Lee was raised in Orange County and at the early age of 3 started appearing in commercials such as Oscar Meyer, CA. Barbie and Pepsi. Her striking picturesque beauty and charisma allowed her to sky rocket in the Import circuit, gaining recognition and video appearances in Mariah Carey's "Breaking Down the Heartbreak", Far East Movement: “Satisfaction” & Dave Navarro's music documentaries. Jeri Lee has been featured in over 60 magazines including Import Tuner (USA), Street Auto (Australia), Playboy (USA), Maxim (Philippines) and FHM's 100 Sexiest Women in the World (2006, 2008 & 2011).

Luxi Boo & Lyla Dee are no strangers to the industry. The Filipino-Irish charmer Luxi Boo has made alluring appearances in music videos by Rick Ross, Frank Ocean, Busta Rhymes, Wiz Khalifa & The Cataracs and is currently Hot Import Nights’ Official Gogo Dancer of 2013. You can also spot Cambodian-Indian beauty Lyla Dee in music videos by Flo Rida, Jay Sean, Tyga, Mike Posner, Lil Wayne & Jennifer Lopez and has shown up in movies such as The Hang Over 2.

The cherry on top is our naughty toy crane machines, blow up dolls galore and much more. Party with only the finest and prepare to be swept away into PLAY's sinful abyss.