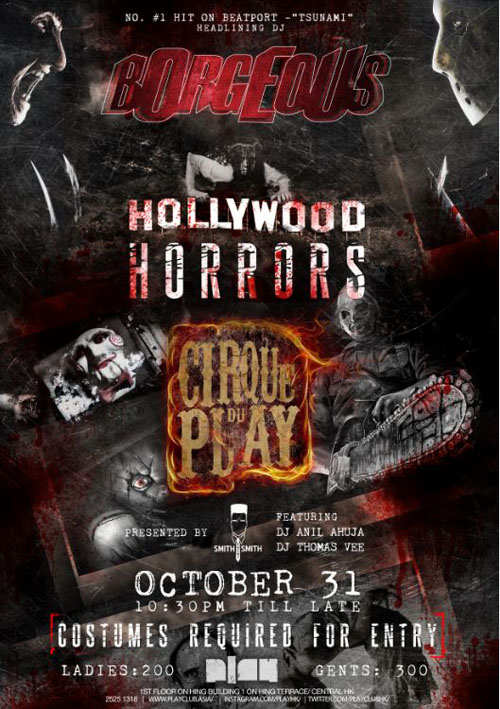 News Flash: Borgeous to headline Cirque du PLAY
CIRQUE du PLAY brings to you an exciting line up this coming Halloween. Head lining as our Hollywood Horror is Beatport Top 100 Chart DJ ‘Borgeous”. Los Angeles resident Borgeous shall be performing his No.1 hit Tsunami at PLAY this Thursday, October 31st 2013.

‘Tsunami’ has been named one of the biggest tracks of 2013 and has had support at every festival including Tomorrowland, Ultra and many others. Big artists such as Calvin Harris, Hardwell, Afrojack and David Guetta have been big supporters of Tsunami since its release.

Borgeous’ earlier releases such as "From Cali WIth Love, GANGSTEROUS & Rags To Riches" debuted in early 2013 to much acclaim. Then with releasing his remix with The Cataracs of Rihanna's "Pour It Up," and his Music Video for his single GANGSTEROUS, and a remix of Ciara's GOODIES & his original track AGGRO music enthusiasts and club-goers alike started to gravitate to his blast-worthy beats. His Goodies remix has had support from Diplo, Sidney Samson, and many others as well. Be sure to be blown away the same way he’s blown of the charts worldwide.

Supporting Borgeous, is our very own international resident SmithAgentSmith. Agent Smith is very excited to celebrate Halloween with us this year in our very own Hong Kong. He shall be pumping out great mash up tunes and his set is bound to be explosive.

SmithAgentSmith puts together sets that are as fluid as they are eclectic. With the setup he created with Ableton Live, SmithAgentSmith is able to remix tracks instantaneously, create new mash-ups and maneuver between songs, tempos and genres effortlessly. What distinguishes him from others in the industry is that he is able to create brand new mash-ups out of song requests.

Make PLAY your home for Halloween madness and you shall not be disappointed.

If this night doesn’t scare you, you’re already dead.


Tickets to CIRQUE DU PLAY - HOLLYWOOD HORRORS for the brave ladies and gents will cost HKD$200 and HK$300 respectively, with all tickets including one choice of the night's standard poison.
Best dressed prizes rewarded in an abundance of Moët champagne.
IMPORTANT NOTICE: No Costume. No Entry.