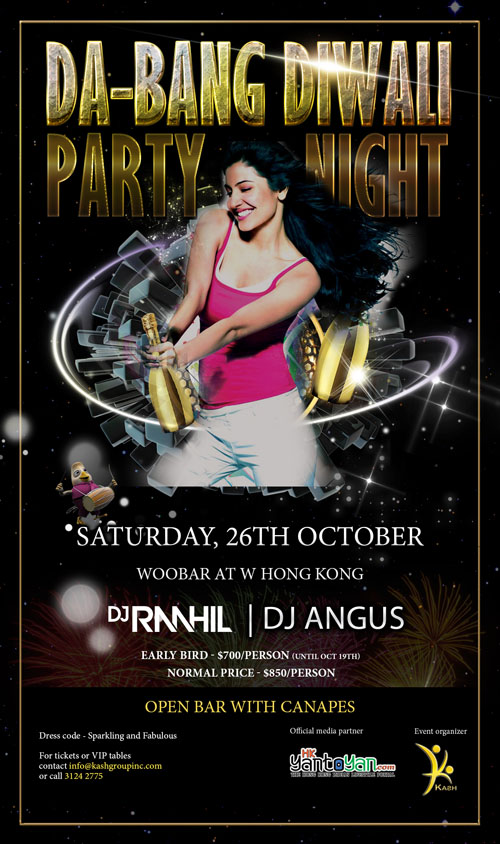 The Biggest and Hottest Bollywood Diwali Party in Hong Kong

The Biggest and Hottest Bollywood Diwali Party in Hong Kong is beginning to look even hotter than ever. Kash Events and Entertainment in association with HKYantoYan.com are hosting a unique Bollywood party for an ultimate night full of foot tapping Bollywood tracks and unlimited dancing at WOOBAR at W HONG KONG.

Diwali, popularly known as the Indian "Festival of Lights", celebrating the return of Lord Rama, along with Sita and Lakshman, from his 14-year-long exile and vanquishing of the demon-king Ravan. In joyous celebration of the return of their king, the people of Ayodhya, the Capital of Rama, illuminated the kingdom with earthen diyas and bursting firecrackers.

This year, Diwali will be celebrated in a unique and multi-cultural way allowing the event to be open to all. WOOBAR will have unique touches of the ethnic elements of this occasion and decor that is sure to dazzle the eyes.

A night full of entertainment! DJ Raahil, Hong Kong’s favourite Bollywood Mixmaster will be performing live in this upcoming party, spinning the best of Bollywood tunes! Raahil’s genesis to the turntables began eight years ago at the decks of Club Chico, where he immediately impressed one and all with his unique desi sounds that rocked the dance floor like never before. He has even collaborated with VJ Sophie (renowned MTV VJ, actress and singer from India), played at the Zee Cine Awards party in Macau and spun alongside television celebrity stars and singers of Zee TV.

DJ Raahil has not skipped a beat with his studio efforts, producing exclusive mixes for events globally. To speak of DJ Raahil is to speak of funky desi sounds. From retro classics to current hits, DJ Raahil’s music is a fusion of Bollywood laced with pulsating electronic sounds.

And if all that is not enough to equate to a rocking party, the night will celebrated with an open bar, serving great assortments of the popular brands to keep the night young and happening. There will be a Dhol (Indian drum) played alongside the DJ which is sure to pump up and take the party to another level. W HONGKONG ’s resident DJ ANGUS will also be spinning to the mixed crowd. Canapes will be served as well for the initial few hours to welcome guests.