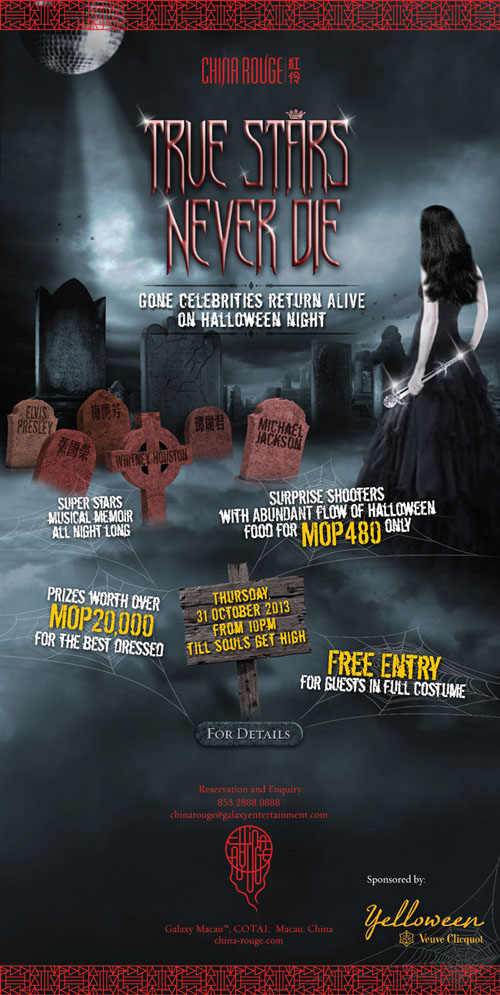 “True Stars Never Die” at CHINA ROUGE
This Halloween, your favoritedepartedpop stars return in spirit for an all-night dance-fest

For some, death isn’t the end of life – it’s the beginning of immortality. Celebrate Halloween at CHINA ROUGE with a tribute to the recording artists who left us too soon during “True Stars Never Die”, an otherworldly costume party featuringhits by international and Asian superstars including Michael Jackson, Anita Mui, Leslie Cheung, Whitney Houston, Teresa Teng, Amy Winehouse and many more. “True Stars Never Die”on Halloween night – Thursday, 31st October –will take over the performance lounge of CHINA ROUGE from 10pm and till the wee hours of the morning.

The evening will also feature La Chiquitta and four ‘girlfriends’, channeling the megastars as only she can. Hong Kong’s most sought-after and prolific drag artiste, La Chiquitta is the host of her own show for wannabe drag queens, an “America’s Next Top Model”-style reality series pitting contestants against each other in a series of outrageous challenges.

Tickets are available for MOP 480 in advance and MOP 680 at the door from 7pm on event day. Entry includes one glass of ChampagneVeuveClicquot.Those who dressin full Halloween costumesget in for free; plus, there are three special awardsand prizes worth over MOP20,000for guests who rock the best costumes.Enjoy surprise shooters after midnight, complimentary Halloween-themed food, and the heavenly tunes of your celestial music heroes – all of it only at CHINA ROUGE, Southern China’s finest, most prestigious nightlife venue.

A very limited number of VIP tables are available for reservation by calling +853 8883 8383 or emailing chinarouge@galaxyentertainment.com. Tables and tickets are sure to go very fast,so act now to be a part of what promises to be a true Halloween party for the ages.

You grew up idolizing these legends – now honor them as immortalswhen they return to light up the spectacular, Alan Chan-designed performance lounge of CHINA ROUGE.For more information about “True Stars Never Die”, call + 853 2888 0888.