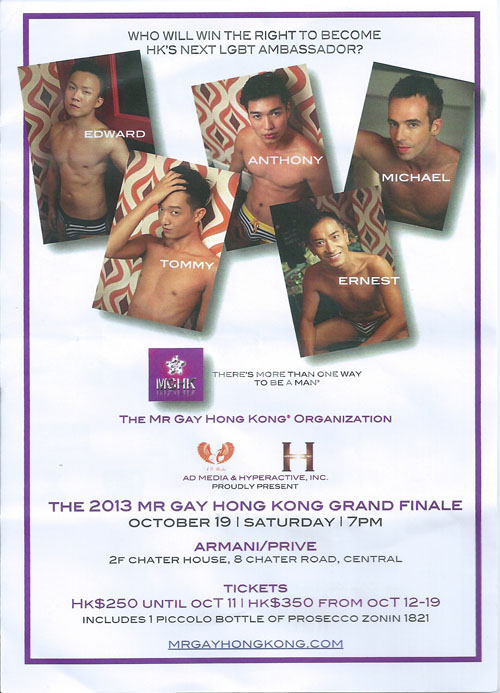 Glam it up with the bold & the beautiful at the year’s biggest LGBT gala, on the open terrace of Giorgio Armani’s flagship club in Asia. Winner will be Red Ribbon Ambassador for AIDS Concern, campaigning for HIV/AIDS awareness and prevention; and will represent Hong Kong at the 2014 Mr Gay World finals in Rome, Italy. Don't forget to vote for your favorite finalist online !

Any remaining tickets from the pre-selling period will be made available at the Door only on the day of the event and will be sold on a First Come, First Served basis until supplies last. HK$350 Includes 1 piccolo bottle of Prosecco Zonin.
Dress Code: Purple Razzle Dazzle

About Mr Gay Hong Kong :
Established in 2009, Mr. Gay Hong Kong is the annual search for the gay man who best epitomizes the cosmopolitan territory of Hong Kong. We focus on a young man’s character and personality that make a difference in the selection.

The winner or Mr. Gay Hong Kong assumes ambassadorship of the local gay community for one year, including being the public face of Tongzhi Tsai, the campaign against homophobic bullying in schools.
Mr Gay Hong Kong also has the unique privilege of representing Hong Kong in the prestigious Mr. Gay World pageant. As a platform for gay rights and issues, past winners has had the honor of having been covered by CNN, USA Today, the South China Morning Post, RTHK, HK Magazine, Time Out Hong Kong, and various important media outlets. Mr. Gay Hong Kong is committed to the advancement of equal rights in mainstream conversations.


There’s More Than One Way To Be A Man!®