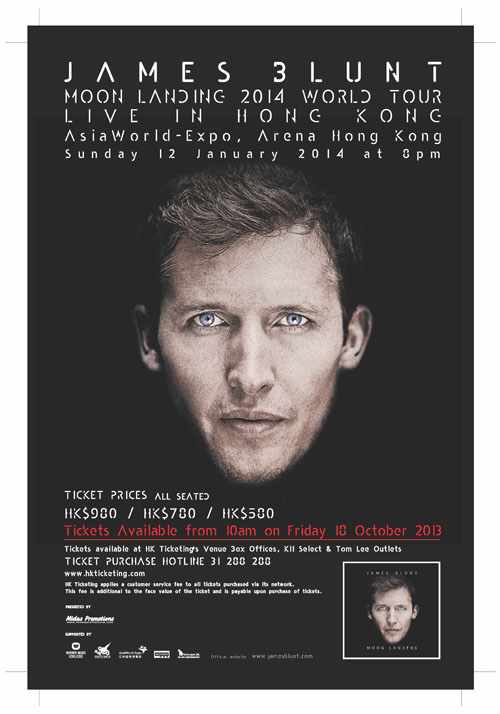 With fourth albumMoon Landing, James Blunt presents a collection of songs that are raw, direct and emotionally honest. The album is about dreams, longing, first love. About getting back to basics and rediscovering the power of music to communicate emotion. First single Bonfire Heart, released on 7 October, has been warmly received by the radio worldwide and praised by critics as a “true return to form”.

Blunt shot to fame in 2005 with his debut album Back to Bedlam featuring massive songs You’re Beautiful, High and Goodbye My Lover. His second album, 2007’s All the Lost Souls debuted at No. 1 in ten countries, selling nearly 5 million copies globally with hit singles 1973, Same Mistake and Carry You Home. His third studio album Some Kind of Trouble was released in 2010 and debuted at No. 4 in the UK with over 100,000 copies sold in just the first week.

Since his debut, Blunt has had four number one singles and received numerous awards and accolades including two Brit Awards, two Ivor NovelloAwards, five Grammy nominations among others. He has sold nearly 17 million albums and 20 million singles worldwide.

As much as he loves making new music, for Blunt, the ultimate joy comes from playing the songs live and sharing them with an audience. Brought to you by Midas Promotions, James Blunt Moon Landing 2014 World Tour Live in Hong Kongis held on 12 January 2014 at AsiaWorld-Expo, Arena. Tickets to the showwill go on sale from 10am, 18 October 2013 at HK Ticketing’s Venue Box Offices, K11 Select and Tom Lee Music Stores. Ticket purchase hotline: 31 288 288, www.hkticketing.com.