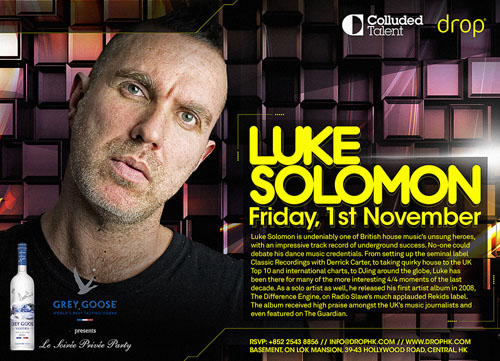 FREAK OR UNIQUE ?
LUKE SOLOMON is undeniably one of British house music’s unsung heroes, with an impressive track record of undergroundsuccess.
Don’t believe us ? Then read on !

No-one could debate Luke Solomon’s dance music credentials. From setting up the seminal label Classic Recordings with DerrickCarter to taking quirky house to theUK Top 10 and international charts, with his band Freaks, to DJing around the globe andperforming live, Luke has been there for many of the more interesting 4/4 moments of the last decade.

After kicking off his DJ career at Middlesex University in the early 90’s, it wasn’t long before Luke was moving in the upper reachesof house music. A gig with Derrick Carter led the two to become friends, after which Classic Recordings was born. For 9 years, thelabel introduced the world to the likes of DJ Sneak, Tiefschwarz, Isoleeand Freeform 5 and garnered a cult following untildistribution difficulties led to the last single issuing forth in 2006.

Running alongside this was the birth and growth of Freaks, the production team Luke started with Justin Harris in 1996. Under theFreaks moniker, Luke & Justin have turned out a slew of singles and longplayers on their own Music For Freaks imprint to include the albums, The Beat Diaries, Meanwhile Back At The Disco and The Man Who Lived Underground. These albums spawned some
of Freaks seminal singles such as Turning Orange, Where Were You When The Lights Went Out and of course their hugeunderground hit, The Creeps. They have also found themselves remixing the
likes of Alison Limerick, Pulp, Damon Alban,Kasabian, The Streets &Duran Duran.

After a bidding war between the majors for The Creeps, Ministry Of Sound snapped up the 4 year old
track and released it into themainstream with a new quirky vocal from Freaks singer Stella Attar. But as the dance puritans sharpened their claws, what doesLuke have to say on achieving a No 9 UK chart hit and potentially being accused of “selling out” ?“It was a weird one for me. When Ministry picked it up, we said fine but we want to write a new vocal for it which we did. Let’sface it you get bands like Groove Armada, Chemical Brothers, Basement Jaxx and it’s all credible music which hits the charts andthe radiowaves. They all have their own take on what they do and it works and I don’t think there’s any reason why Freaks can’tdo that aswell.”

However, besides having chart success throughout the world and running a successful label, Luke really feels like his own career isjust beginning. As a solo artist he has had releases on a variety of labels to include the very respected Crosstown Rebels. His 1startist album “The Difference Engine” was released in 2008 on Radio Slave’s much applauded Rekids label. A sprawling trip of an
album, the 13 tracks span all manners of genre and moods with thedancefloor energy offset by an
experimental ambience notnormally associated with house. While Solomon productions of old were filled with an off kilter sense of fun, there is a seriousside to “The Difference Engine” that belies the cheerful confidance of the man behind it. The personal feel of the album is furtherfuelled by the lyrical content and one of the standout moments is “The Darkest Secret”, a track featuring Earl
Gateshead of TrojanSoundsystem and reminiscent of John Cooper Clark, the 70’s punk poet. For Luke, Earl was an obvious choice to work with as hefilled the role of the poet perfectly, so they ended up writing the song together in an ice cream shop in Chalk Farm !

The Difference Engine received high praise amongst the UK’s music journalists and saw The Guardian featuring the album in it’srevered review section.

“The Difference Engine finds Solomon indulging his passion for acid house, detroit techno and post-punk without ever being in
thrall to them. It is a relaxed, loose limbed affair, inventive and astonishingly hooky, at times reminiscent of a less mannered, lessmiddle-aged LCD Soundsystem.” Alex Macpherson

This album led Luke to team up with Damian Lazarus on his own artist album and Luke co-wrote and
co-produced a selection oftracks for the longplayer, working alongside the highly talented Arthur Jeffes, son of Simon Jeffes from the hugely influential, ThePenguin Café Orchestra. The album entitled, “Smoke The Monster Out” has since been released worldwide via Get Physical
Records, based in Berlin, and as Dazed and Confused noted “It is a truly inventive, deviant and uncompromising” piece of work.But what does the future hold for Mr Solomon. Well besides continuing to travel around the world to DJ (playing the likes ofPanama Bar, Berlin, Fabric, London, Moxa Club, Italy, Zukunft, Switzerland, D-Edge, Brazil) releasing new material from Freaks on
Rebirth Records, creating a new club moniker, Lukatron which will see it’s first release on Quintessential and continuing to remixunder Luke Solomon and Freaks guises, Luke has also just finished recording his 2nd artist album “ Timelines” which features thelikes of Jon Marsh from The Beloved, Tiger,Tiger& Natalie Broomes on vocals.

So whether it’s a second coming or not, one things for sure, Luke’s credentials are most certainly not to be argued with.