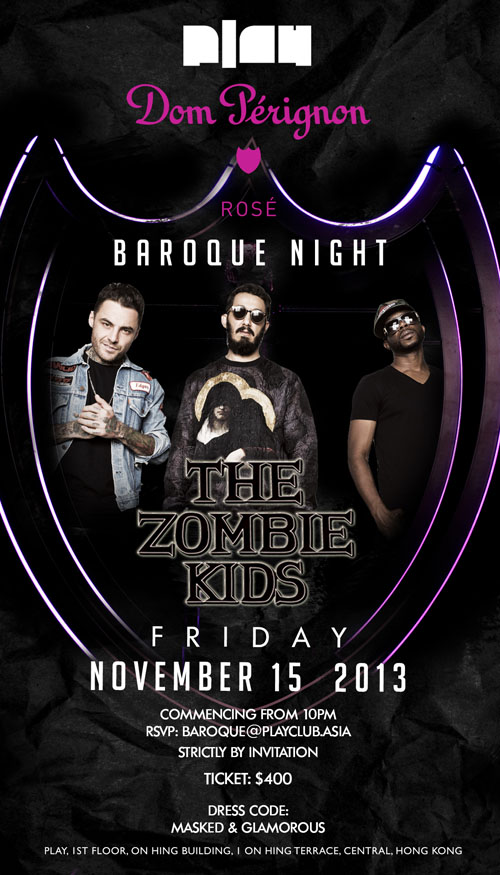 DP Baroque Ft. The Zombie Kids
DP Baroque is a global masquerade party brought to you by decadent champagne house Dom Pérignon. This year they shall be throwing us their infamous party at the biggest champagne club in Asia, Hong Kong’s very own, PLAY Club. Baroque is known for its mystery, chic style and elegance. Consider yourself lucky if you’ve received their specially flown invitations from Paris, and beautiful handmade masks for the evening. Guests shall expect to be showered with champagne and be graced by beautiful women in lace.

PLAY is adding a special treat to the masquerade with a wild performance by THE ZOMBIE KIDS, an all-star group who have been breaking the dance music scene in Spain and internationally. Get ready for this highly energized performance this Friday November 15th, as they make their way to Hong Kong for the very first time.

This eclectic DJ/ Producer duo was formed in 2009, founded by Edgar Candel Kerri and Cumhur Jay. Edgar and Jay’s musical influences hail from punk, soul, rock & hip-hop which they have meshed together creating 'THE ZOMBIE KIDS' sound in today’s electronic dance scene. We found not only does the group produce music, but also co-own the Zombie Club, a famous Spanish club that has been responsible for a good part of their success. They also run the Zombie Studio, which encompasses activities such as design, fashion and art.

This year The Zombie Kids have added another addition to the group: MC AMBUSH, acting as a 3rd pillar to the group making the ensemble complete. He is also dubbed as 'the voice' of The Zombie Kids. Ambush has worked closely with some of EDM’s biggest stars like R3hab, Afrojack, David Guetta and vocals on the smash hit with Hardwell & Chuckie 'Move it to the drum'.

The Zombie Kids debuted at Rock in Rio Festival (Lisbon) and since then, have been at many recognized festivals such Global Gathering (Birmingham), Exit (Serbia), Creamfields (Spain), Sonar (Spain), Pukkelpop (Belgium), Arenal Sound (Spain), DxB Festival (Dubai), I Love Techno (France), Festival del Globo (Mexico) and Ultra (Chile). They are also summer residents of some of the best clubs in the world such as Amnesia, Space and Privilege (Ibiza) or Razzmatazz (Barcelona).

The duo topped iTunes charts in 2011 when their debut single “Face” received more than two million hits and was released in the US and Canada. After signing to Universal Music in 2012, the first two singles off their debut LP “Live Forever 2012” and “Spanish House Mafia” shot straight to #1 on iTunes Spain and earned them the Best Spanish Artist award at MTV’s 2012 EMA Awards. They are continuing to travel around the world promoting their new latest video single from their album The Zombie Kids, Fire (feat. Aqeel).

The event is by invitation only or $400 HKD at the door. Doors open from 10pm till late.
Dress Code: Masked & Glamorous