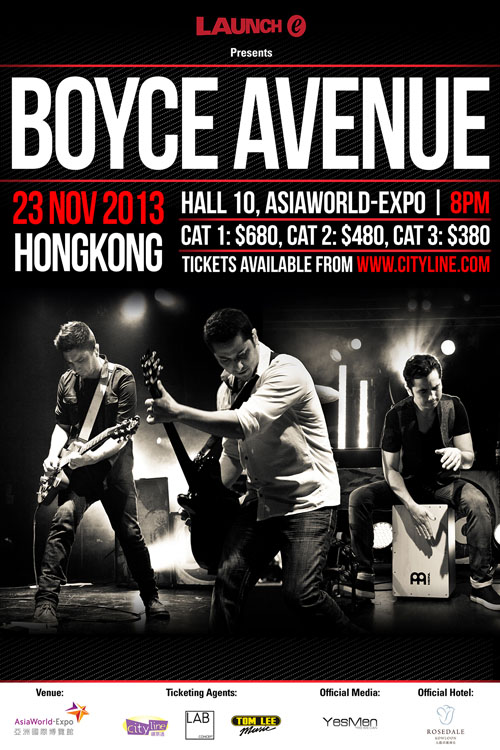 BOYCE AVENUE SET TO PERFORM IN HONG KONG THIS NOVEMBER

Launch Entertainment is pleased to announce that Florida-based band, BOYCE AVENUE, will be setting foot in Hong Kongthis November!
Brothers, Alejandro, Fabian and Daniel Manzano, first came together in 2004 as a band famous for their strong acoustic and melodic rock vibe. Today, they have an immense following on its YouTube channel, amassing over 1 billion views.
In 2007, the band started producing videos on YouTube comprising theiroriginal songs and covers of their favourites by other artists. The videos went viral instantly. Some of its recent collaborative covers include Justin Timberlake’s ‘Mirrors’ that hasclocked almost25 million hits on its YouTube channel to date.
The band had their first ever stand-alone show in New York City in 2009. It was an incredible success and was a surprise to many in the industry. Since then, the band had been touring the world with headline tours in the USA, Canada, Europe, Indonesia and Australia.
From 2011, the band started their own record label named 3 Peace Records. Armed with its first ever live album, “Live in Los Angeles” that was released this August on iTunes and Spotify, fans can be assured that this is a strong testimonial of the band as artists selling over 300,000 tickets worldwide.
As part of the Asia portion of their current World Tour, which has already had stops in Brazil, the United Kingdom, Ireland, Canada and the USA this fall, theFlorida-based band will be bringing their impeccable musical showmanship, performing at Hall 8, AsiaWorld Expo in Hong Kong on 23rd November 2013.