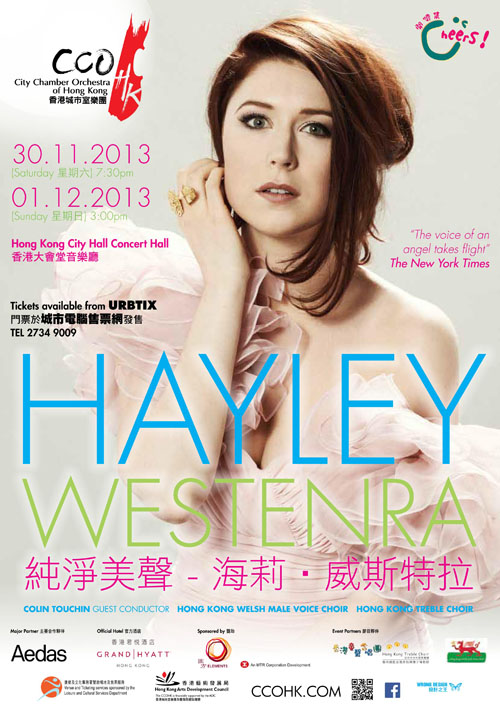 The Angelic Voice of Our Time: Hayley Westenra Hong Kong Debut on December 1!

Hayley Westenra, international singer, songwriter and UNICEF ambassador will premiere in Hong Kong at City Hall on November 30 and December 1, 2013.  Born in Christchurch, New Zealand, and now based in London, the classical superstar singer songwriter, has won number one on the UK classical charts in 2003 and her CD Pure, sold more than 2 million copies worldwide, becoming the world's fastest selling international debut for a classical album.


Child Prodigy
Discovered at the age of 6 while singing in the school play, Hayley was identified as having "perfect pitch" by the scout, and quickly signed to Universal Records and later to Decca, one of the world's top classical labels.  She later studied with Opera Superstar Malvina Major who described Hayley's voice as being "expressive, pure, and angelic."

Hayley has also been named one of the 10 Outstanding People in the World, by Junior Chamber International.

A Song for the Royal Baby
Having sung for Heads of State and royalty around the world, Hayley has turned her attention to the British Royal Family!  Her newest album Hushabye, is dedicated to the Duke and Duchess of Cambridge's royal baby George.  The song is called Sleep On and was written by Paul Mealor, the composer who arranged the music for their royal wedding.  The new album Hushabye will calm children and parents alike.

Hayley the Philanthropist
Not only has Hayley sung numerous genres from classical music, to easy listening and folk/pop songs, she has also sung in over 12 languages including English, French, Japanese, Mandarin and even Maori.  Her charitable initiatives are equally impressive as Hayley was one of the youngest UNICEF Ambassadors of all time (from the age of 16).  She has sung for numerous charities across the globe, including Bikes for Ghana (Africa), Music for Therapy in the UK, and Save the Children in Hong Kong.  She has also received the Global Kiwis Young Achiever Award for her contributions on a global scale.