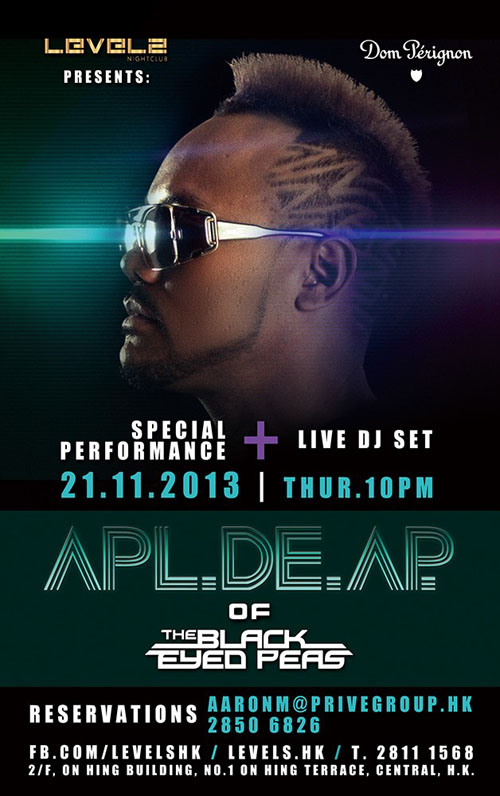 APL.DE.AP OF THE BLACK EYED PEAS LIVE AT
LEVELS NIGHTCLUB

APL.DE.AP of The Black Eyed Peas will be taking over the DJ booth at LEVELS Nightclub for an exclusive DJ set and special performance on Thursday, November 21st, 2013 at 11:00PM.

APL.DE.AP will be touring the Australia and Asia region for the month of November, and will make a much anticipated stop in Hong Kong.

Allan Pineda better known as APL.DE.AP, is a Filipino-born American rapper, record producer, and occasional drummer who is best known as one of the founding members of the Grammy Award-winning group The Black Eyed Peas. From producing and performing this past decade’s biggest hits such as “Where Is The Love?”, “I Gotta Feeling”, “Boom Boom Pow” to his own solo endeavours “Balikbayan” and “Going Out”, APL.DE.AP’s skills and talents are something else.

LEVELS is a 8,000 square foot partying space in Central that provides customers with state of the art Logic System speakers, first class interior design by J. Candice Interior Architects featuring mood rooms conceptualized as Liquid & Solid, and the largest dance floor in Hong Kong. The space was acquired in August 2012 by one of Hong Kong’s premium entertainment groups - Privé Group. LEVELS was named to represent the next level of the night life industry, as this will be Privé Group’s largest night club to date. The club also features two bars, 37 VIP tables, and an enclosed VIP private room. LEVELS members enjoy a “Buy 2 bottles of champagne, get 1 free” deal every Thursday night.

For more information, please visit our website www.levels.hk and Facebook page www.fb.com/levelshk or call our head office at +852 2850 6826.