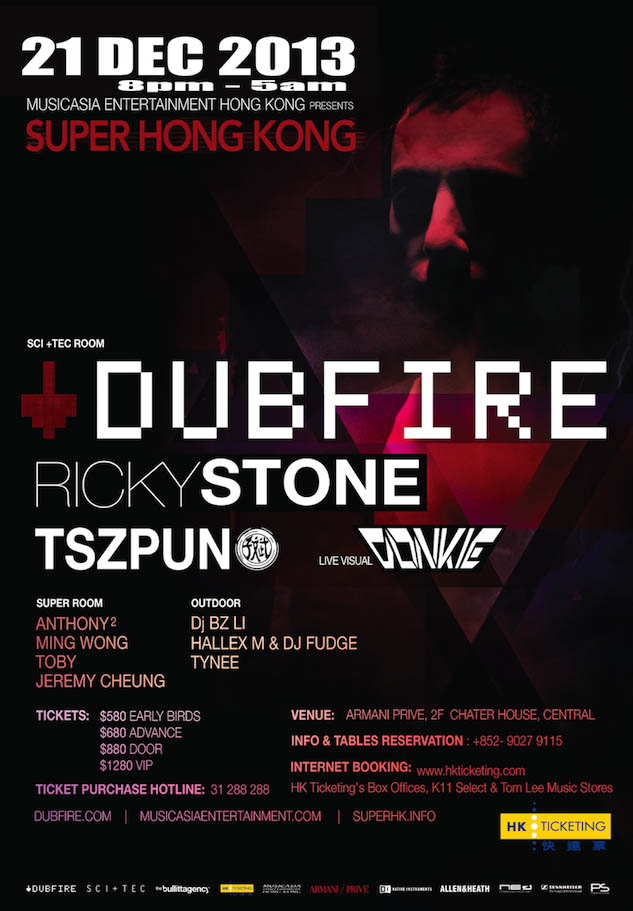 Super Hong Kong has just one ambition: celebrate & party to the max!

Super Hong Kong event will Smash the frontier of sound with the presence of renownedinternational DJ & Grammy winner Dubfire , backed by a solid rock delegation of Hong Kong Representatives, But one thing remains unchanged: the readiness of Hong Kongers to have a good time and to celebrate big occasions to the max.

This coming Dec 21, the 2nd edition of Super Hong Kong will be the perfect time for locals and visitors to kick up their heels to their hearts’ content when Dubfire, Ricky Stone, Tsz Pun, Ming Wong, Toby, Jeremy Cheung, Dj Bz Li & Special Guests, set the Armani Aqua/Prive at Chater House Central vibrating with shots of bass frequencies and masterly mixes.

The biggest party of the holiday season, which will begin on the evening of Dec 21 and continue until 6’clock the following morning. For Ten consecutive hours the place with 2 rooms and outdoor area will metamorphose into an immense dancefloor, with sophisticated lighting, animation andultra-¬‐ powerful sound equipment plunging participants into the enveloping atmosphere of asuper-¬‐sized club. With the proverbial energy and the sex appeal of the Hong Kong crowd, all the elements are in place to make a night that will leave partyers positively transformed.

A blend of regulars, legends and new figures, an exceptional selection of the finest international DJs will all be on hand to take rhythm to its highest expression for an event that is definitely not to be missed. In light of the excitement generated by Super Hong Kong and the capacity limits, it is highly recommended to get tickets quickly.

Don’t delay in getting your tickets for the Super Hong Kong 2nd Edition, as these are going very quickly.

Beginning on Tuesday, October 22 2013, early birds & advance tickets –will be offered on presale at a price of $580, Tickets are exclusively available on the Web and by telephone, as well as at the usual network of specialty points of sale HK Ticketing's Box Offices, K11 Select & Tom Lee Music Stores) To celebrate in total comfort setting for the festivities nothing will do the job better than renting a VIP table for the Super Hong Kong. 200 VIP tickets will also be offered, at a cost of $1280. it provides a VIP section and entitles the holder to Super VIPs Tables, priority admission. Comfortable furnishing, unbroken view over the crowd and Djs.
To avoid congestion and waiting at the venue Entrance entryway for Super Hong Kong, show up early. A higher number of security agents will also be assigned to Crowd Control in order to speed up access to the venue.

The most demanding fans of electronic dance music will have their appetites satisfied and then some by the collection of formidable talents at this 2nd Super Hong Kong edition.

DUBFIRE (BIOGRAPHIE)
“I try to apply a punk ethic to my own music...it has to be groundbreaking, futuristic, unique, and organic.”
Grammy-winning recording artist Dubfire is renowned for his seamless DJ sets, groundbreaking music, and his innovative label, SCI+TEC. Widely recognized as one of electronic music’s most versatile artists, Dubfire initially brought a pioneering sound to the masses during his days as one-half of the distinguished DJ & production duo Deep Dish, which led to a catalog of timeless dance classics, a Grammy for remixing Dido’s “Thank You,” and numerous international awards to their credit.
Dubfire has always been a risk taker, and his decision to go solo in 2006 was precarious, but staying true to his convictions was not without reward. The cadence of his early solo productions came in the form of a massive string of releases including “Ribcage,” “Roadkill,” “Emissions,” and “I Feel Speed.”

In 2008, Dubfire remixed Radio Slave and Danton Eeprom’s “Grindhouse,” a track that has come to encapsulate everything he stands for today: dark funky rhythms and technological brilliance. The remix crossed nearly every genre and was the apex of a unique sound DJ Magazine labeled "jet black, polished chrome techno.” This success led to a collaboration with pioneering UK outfit Underworld, resulting in two tracks, "Bird 1" and "Grace," that were included on the band’s 2010 long-player, Barking.

Most recently, Dubfire decamped to Barcelona where he established a studio, an international office for The Bullitt Agency (which he co-owns) and created a convenient jump-off point for frequent trips to Ibiza where he is a fixture at the White Isle’s most exceptional outings - Cocoon, Carl Cox’s Revolution, Circoloco and most recently, Richie Hawtin's ENTER.

All the while, Dubfire has grown SCI+TEC into a home for many emerging and established talents, and has launched label showcases across the globe, notably at the BPM Festival in Playa Del Carmen, WMC in Miami, Sonar in Barcelona, Kazantip Republic in Simferopol, and Amsterdam Dance Event.

An avid “foodie”, Dubfire has become a leading authority on cuisine and prompted him to launch a new concept dubbed “MENU by Dubfire”, which he debuted to great success at Chicago’s Wavefront Music Festival. "I thought that this was a great way to integrate two of my passions, food and music”. MENU’s mission is to create showcases where music and food intersect. The soundtrack and the night’s menu are both curated by Dubfire.

After more than twenty years behind the decks and in the studio, Dubfire continues to make his mark on the future of electronic music. Strongly rooted in where he came from, yet always evolving, Dubfire will continue to pioneer music that sets the standard and has earned him the title “the DJ’s DJ.