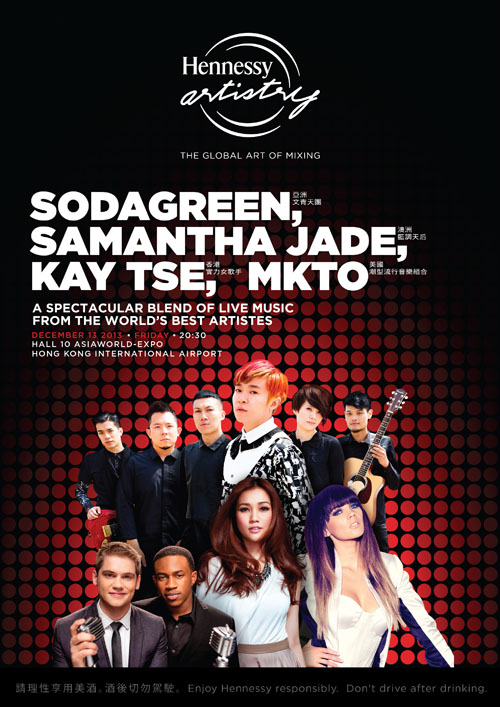 The global music event of the year, "Hennessy Artistry 2013" will be held on 13 December at AsiaWorld-Expo. Hennessy Artistry 2013 brings together a range of unique world musical styles and top artistes that include Taiwanese indie band Sodagreen, Australian blues singer & songwriter Samantha Jade, Cantopop talent Kay Tse, Californian hip-hop duo MKTO, and V.N.P., a harmonious trio who won at the Hennessy V.S.O.P & Sony Music 2013 Online Audition. Hennessy Artistry is where the city’s music fans experience the coolest cross-border collaboration, displaying the brand’s essence “Dare to pursue your dream”, while appreciating century-old Hennessy Cognac as the ultimate expression of “The Global Art of Mixing”.

Since 2006, Hennessy V.S.O.P has promoted the concept of “The Global Art of Mixing” through spectacular and sophisticated shows staged across the world's major cosmopolitan cities. It has brought together the most exciting music across the globe, blending a variety of artistic styles and genres, like an expert cognac maker who combines more than 60 ‘eaux-de-vie’ (water of life) to create a premium spirit Hennessy V.S.O.P.

Hennessy Artistry 2013 will be held on 13 December (Friday) at AsiaWorld-Expo Hall 10, starting at 8:30pm. From now on until 11 December 2013, purchase of two 70cl bottles of Hennessy V.S.O.P. at specified times and outlets are entitled to a Hennessy Artistry 2013 ticket, while three 70cl orders of Hennessy V.S.O.P. will entitle to two tickets. Within the specified time, these tickets can be exchanged at the redemption centre for a Hennessy Artistry admission hand strap. Admission straps are limited in number and are available while stock lasts. More details are available on www.hennessyartistry.com.hk or Hennessy Hong Kong Facebook page.  For inquiries, please call 2976 1222 during office hours or email: hennessyartistry@mhdhk.com.

Sodagreen ─ Taiwanese Indie Tour De Force
Formed in 2001, Sodagreen is a Taiwanese indie band whose six-member lineup has remained unchanged since 2003. The band gained prominence after performing at the Ho-hai-yan Rock Festival, after which it signed up with Willlin Music. In May 2004, Sodagreen released their first single “Aerial Visions, Sounds And Illusions (空氣中的視聽與幻覺)” at Taipei’s National Chengchi University School Rock event, catapulting them onto Mandopop stardom. Though a signed band, producer Will Lin continues to encourage Sodagreen to retain and cultivate their indie style and sound for their fan base. Sodagreen was also the first ever indie-style band to perform at the Taipei Arena.

Samantha Jade ─ Australian Blues Diva
Samantha Jade is an Australian singer-songwriter who was the first female to ever win the (fourth series) of The X Factor (Australia) in November 2012. She subsequently released her debut single “What You’ve Done to Me” which reached No.1 on the ARIA (Australian Recording Industry Association) Singles Chart, while her self-titled album reached third place on the ARIA album chart. She is an outstanding musical talent who has both attracted the public spotlight and has gained music industry recognition.

Kay Tse ─ A Cantopop Talent
Kay Tse achieved runaway success in 2008 with her album “Binary” and the single “Wedding Invitation Street (囍帖街)” which broke platinum record sales and topped the four major charts in Hong Kong. As a result, she walked away from the four digital media music award presentation ceremonies with a total of 17 awards in 2008, including the most prestigious “Media Award – Performer” presented at the Four Station Joint Music Awards. Kay Tse has achieved premier status as a diva of the Hong Kong pop music scene.

In 2009, Tse gave her debut solo concert at the Hong Kong Coliseum, and released the album “Yelling (吶喊)” at the same time. The album also made the Top Ten Best Selling Chart in 2009. Her 2010 release “Slowness” was on the Hong Kong Record Merchant Album Sales Chart for nine weeks. In November of the same year, she launched her first Mandopop album, “My Second Home (第二個家)”, in which “Weakness (脆弱)” took not only Hong Kong, but also Mainland China and the rest of Asia by storm, topping charts in various media and winning numerous awards.

Kay Tse was named one of the ‘Ten Outstanding Young Persons’ of Hong Kong in 2010, and a ‘Young Leader’ by People Weekly, of the Nanfang Group of China.

MKTO ─ Blend of Pop and Hip Hop from the U.S.
MKTO members Malcolm Kelley and Tony Ollermet in 2010 while filming the Nickelodeon TV show “Gigantic” in which their characters played best friends. From that connection, they formed the band MKTO which is their combined initials. Both have a wide range of musical influences straddlingpop, hip-hop and R&B to produce their own vibrant musical style. In early 2012, MKTO signed to a new partnership involving longtime musical collaborators Emanuel “Eman” Kiriakou and Evan “Kidd” Bogart. This songwriting duo has been responsible for hits from Beyonce, Rihanna, Selena Gomez, Hot Chelle Rae, Sean Kingston, Jason Derulo amongst others.

V.N.P. ─ A Harmonious Combination of Vocal and Piano
V.N.P. is the acronym for vocals and piano. Leo Wang and Lester Chong are the vocalists while Ruby Leung is pianist/keyboard player. The three members are like-minded in their passion for and knowledge of music, and hit it offstraight away. The band was formed to contest the "Hennessy V.S.O.P & Sony Music 2013 Online Audition". After a winning vote from a professional panel of judges, their success is a reflection of Hennessy V.S.O.P’s "Dare to pursue your dream" philosophy.