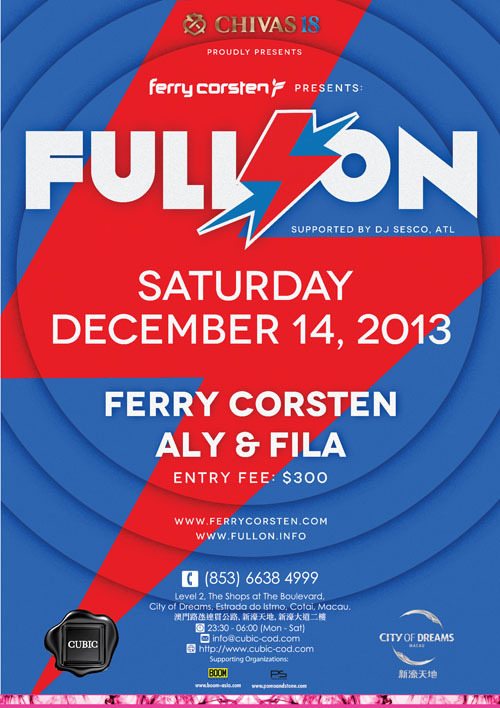 CHIVAS 18 proudly presents FULL ON on Dec 14th 2013.  This December, Ferry Corsten invites together one of the biggest DJ acts in EDM, Aly & Fila, to Club CUBIC Macau with their inimitable sound!

In 2007, Corsten launched his FULL ON FERRY live show concept whereby he melds different styles of dance music by playing back-to-back sets with his cherry-picked roster of DJ/producer friends and a state-of-the-art stage setup. Fellow DJs and producers such as Dash Berlin, Aly & Fila, Mark Knight, Bassjackers, Dimitri Vegas & Like Mike, Shogun, Cosmic Gate, and many more have accompanied Ferry on multiple venues and FULL ON stages in festivals worldwide.

Hailing from Rotterdam, the Netherlands, Ferry Corsten’s lustrous career is exemplified by a passion for music that began as a hobby and spiraled into a full-blown profession. Today, as it was in the beginning, Corsten’s skills lie in his ability to coax the maximum emotional impact from electronic dance music of all genres, not just trance, but also progressive-house and electro. He remains and has always been ahead-of-his time, making music that becomes a template for others to follow.  Striving always for excellence, this is an artist who is never satisfied with all that he’s accomplished, instead always pushing for the next exciting idea. For Ferry Corsten, the possibilities are boundless.

Ranked as one of the 20 biggest DJ acts in EDM (source: DJ Magazine Top 100 DJs 2012), they delight crowds now numbered annually in the millions, bringing their inimitable sound to the world’s most prestigious clubs and festivals. No mirage, no illusion - this is Aly & Fila.
This combined force of production and turntable feats has resulted in string of high charting positions in several of EDMs’ key polls. Included amongst them are seven consecutive years in DJ Mag’s annual countdown (rank #20 in 2013) and a #4 notch on TranceAddict’s Top 250 in 2012.