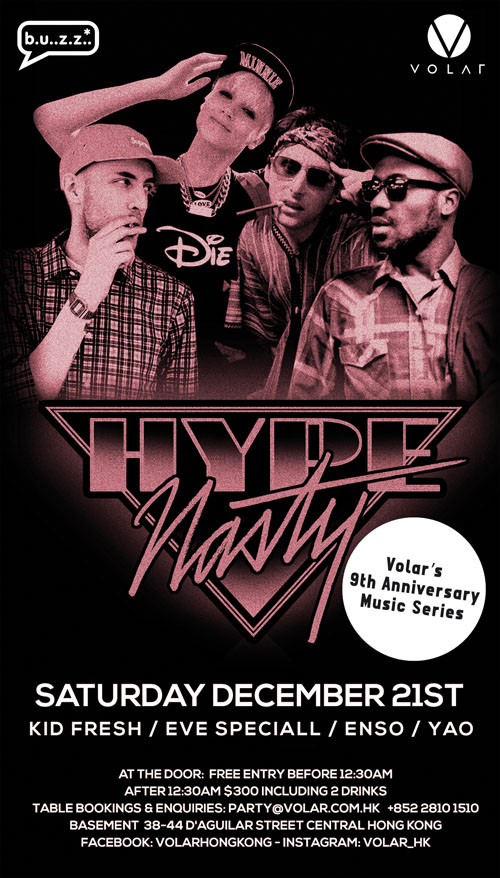 Last HYPE NASTY party of 2013! With four of the best DJs in town Kid Fresh, Yao a.k.a. Yaoser(s), EVE SPECIALL & DJ Enso get ready to get down!


Kid Fresh (http://www.soundcloud.com/kidfresh)
Hailing from Germany and based in Hong Kong, Kid Fresh is known as one of the key tastemakers and most in-demand DJs in Southern Asia’s club circuit. As a mastermind behind the monthly event series HYPE NASTY at Hong Kong’s superclub VOLAR, his night was awarded Hong Kong’s Best Club Night by Time Out magazine in 2009 and 2010. He is frequently booked to play every major club in Asia like M1NT (Shanghai), Bed Supperclub (Bangkok), ZOUK (Singapore), MODULE (Tokyo) and PUNK (Beijing), spun memorable sets at GREENHOUSE (New York City), FABRIC (London), and WATERGATE (Berlin).

Eve Speciall (http://soundcloud.com/dj-eve-speciall)
With a residency at Fly (HK) and the title of Music Director for HK Fashion Week for two years running, she's racked up credits DJing at Volar (HK), XXX (HK), Cookies (Berlin), Flamingo (Berlin) and 7th High (Manila). She's also been busy spinning at major events for Givenchy, Levi's, Forever 21, 3.1 Philip Lim, Lane Crawford (Vogue Fashion's Night Out), Veuve Clicquot, Ksubi, Bershka (Manila Launch), Christian Louboutin, MCM, House of Holland, Chloe and Juicy Couture. Eve is the only DJ to have opened Topshop stores in two different countries, with the very first store in HK and being flown in to LA to DJ for the opening of Topshop in The Grove to perform alongside Demi Lovato. Most recently she played the first ever Do Over in Hong Kon and Rock the Belles in HK and Manila.

DJ Enso (https://soundcloud.com/djenso)
A native of the San Francisco Bay Area, DJ Enso’s production has received print and online acclaim from XLR8R, Flashmag, 3HIVE, and more. Highlights include contributions to the Solos in Stereo compilation series (2005, 2008), The Hidden staircase Maxi-EP (2006), plus countless remixes and podcasts. DJ Enso produced the audio score to Akit Fong’s 2007 independent film Close to Perfect, and has collaborated with traditional Chinese vocalists on a number of recent productions. As a club DJ, he plays an eclectic mix of modern dance music, from UK bass to UK funky, hip hop to dancehall, bmore to miami bass and electro to juke.

Yao (https://soundcloud.com/yaodoit)
Yao is a young, talented producer hailing from SF's Bay Area, whose many influences include jazz, funk, soul, Brazilian, black futuristic, and psychedelic music and movements, which he incorporates into his own distinct style of production.
In 2006, Yao released "Plantain is Public" on Solos Records. Since then he has voyaged to close and far away lands encountering people and places that inspire him and his art.
While his productions are rooted in hip hop, electronic and future experimental beat music, his vision is all seeing and you'd be liable to catch him DJing anything from dubstep and funky to Brazillian and Afro beat records.