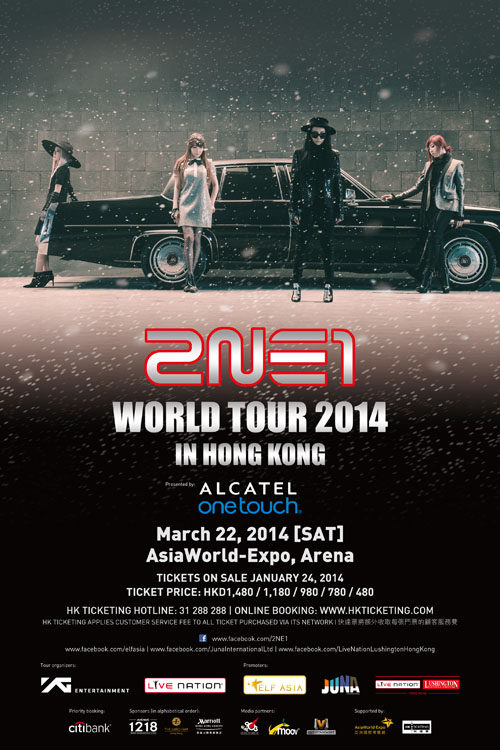 “Queens of KPOP” 2NE1 Set to Grace the Stage with Their First Ever Concert in Hong Kong
“2NE1 WORLD TOUR 2014 in HONG KONG Presented by ALCATEL ONETOUCH”
on March 22 (SAT) at AsiaWorld-Expo, Arena
Delivering the Most Energy-filled Concert by showcasing their Singing and Dancing Talents!

“Queens of KPOP” 2NE1, renowned for their powerful on stage performances, as well as unrivalled vocals and dance moves, are set to ignite the stage at AsiaWorld-Expo, Arena for their historic first ever Hong Kong show “2NE1 WORLD TOUR 2014 in HONG KONG Presented by ALCATEL ONETOUCH” on March 22, 2014 (Saturday).

“2NE1 WORLD TOUR 2014 in HONG KONG” is the second world concert tour of 2NE1 and it will kick-off in Seoul on March 1 and 2. After the Hong Kong leg, the group will then move on to perform in Singapore, Taiwan, Thailand, Philippine, Japan and other cities around the world. Their first world tour “New Evolution World Tour 2012” was a huge success and was named as “One of the Best Concerts in 2012” by New York Times. They seek to extend their glory in “2NE1 WORLD TOUR 2014 in HONG KONG Presented by ALCATEL ONETOUCH” and will be landing in Hong Kong for the first time to deliver the most fabulous concert that all music lovers and fashionistas in Hong Kong have been long looking forward to.

The four members CL, Park Bom, Dara and Minzy came together and debuted as 2NE1 in 2009. They immediately garnered market attention through their collaboration with their labelmate BIGBANG and was regarded as the female version of BIGBANG given their plethora of talents and unique fashion sense. They are known as the most prominent Korean artist group for their stylish, powerful, yet feminine music and performance style and are widely worshipped by music lovers and fashionistas both locally and internationally. They has evolved and exerted their influences as a leader and representative of KPOP music, fashion and culture in the global music scene. Their music garnered every bit of attention and received enormous recognition. Their top 3 songs, “I Am The Best”, “Lollipop” and “Lonely”, have accumulated more than 150 million views on YouTube. Together with PSY and BIGBANG, 2NE1 dominated Billboard's '2013's Biggest-Selling K-Pop Songs', ranking at #6 with “I Am The Best” and #10 with “FALLING IN LOVE”.
- Cont’d -
“The Baddest Female” CL is a gifted rapper, vocalist and dancer. She is the leader of 2NE1 and has been exerting influences and became the trendsetter of the era inspiring world renowned designers, music lovers and fashionistas. Park Bom is the main vocal of 2NE1. She has one of the best voices among all Korean idols. Her outstanding performance in her solo single “You And I” has gained overwhelming responses and won her the “Best Digital Single Award” in 2010 MAMA. Dara is always a sweet, warm and caring person and became the ideal spokesperson for leading brands. She has shown her acting talent in movie “Bcuz Of U” and has won the “Best New Actress” in the 21st “Philippine Movie Press Club Star Awards”. She actively engages in communication with fans and is the promotion manager of 2NE1! Minzy, the youngest member in the team, has the best music and dancing skills. Her collaboration with CL in the solo single “Please Don’t Go” in 2009 become an instant hit and peaked at # 6 on Gaon Chart.

2NE1 has been a frequent awards-grabber since their debut in 2009. The title track of their 1st mini album, “I Don’t Care”, conquered various Korean music charts and won them the “Best Digital Single”. Their signature song “I Am The Best”, garnering over half a million views in just a day, won them the “Song of the Year Award” in “2011 MAMA” and firmly established their dominance in international music industry by crowning the “Best New Band in the World” in the prestigious “2011 MTV IGGY Awards”. They continued to produce numerous hits, including “Falling in Love”, “Do You Love Me” and “Missing You”, which all topped iTunes charts in numerous countries. Their astonishing performances were widely recognized by international artists which even will.i.am has invited the girls to collaborate in his second album “#willpower”.

Beside their outstanding music achievements, 2NE1 has also been recognized as the style icon in the era with their unique fashion sense well blended with their bold and bright outfits. World renowned artists, including Rihanna, Jeremy Scott, Snoop Dogg, Pharrell Williams, Jared Leto and Terry Richardson, etc. were attracted by 2NE1’s extraordinary charm and became their fond followers. They were also selected as “The Top 12 Girls To Watch In 2012” in MTV Style with their eye-dazzling style.

Representatives from the concert organizers, including ELF ASIA, Juna International and Live Nation Lushington (Hong Kong) commented, “2NE1 is one of the most inspirational artists in the world with their avant-garde music and fashion sense. We are delighted to be able to take part in “2NE1 WORLD TOUR 2014” and to bring 2NE1 to Hong Kong. We believe 2NE1 will deliver the most unforgettable and spectacular concert for all Hong Kong audiences and take KPOP in Hong Kong to the next level. Everyone let’s join our party!”

ALCATEL ONETOUCH is the title sponsor of “2NE1 WORLD TOUR 2014 in HONG KONG”. Citibank is the exclusive priority booking service provider of the event. The concert is also sponsored by Avenue 1218 by KOYO JEANS, The Langham, Hong Kong and Hong Kong SkyCity Marriott Hotel. It is also fully supported by AsiaWorld-Expo. Commercial Radio 2, MOOV, Channel V and Channel M are the media partners.