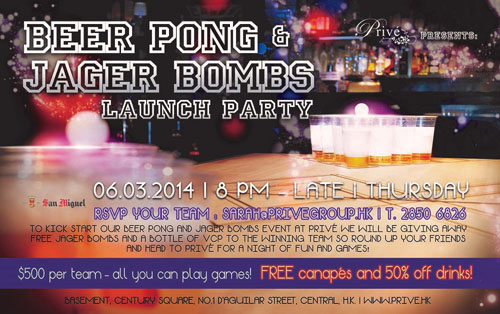 Privé will be kicking off their first beer pong and jager bombs event on Thursday, March 6th 2014 at 8:00pm which will feature 4-6 different teams who will try to eliminate each other by playing 5 games (the best out of 5 will win)! $500 per team for all you can play games and the winning team will receive a bottle of VCP and a round of jager bombs. Canapés will be provided and 50% off drinks will be offered.

About Beer Pong
Beer pong is a popular drinking game in which a player throws a ping pong ball across the table with the intention of making the ball land in the cup of beer. If the ball lands in the cup of beer, the other team will have to drink the cup of beer and the cup is removed from the table. Each team consists of 2-3 players with 10 cups set in a triangle form. The first team to eliminate all of the opponent’s cups wins.

About Privé
Privé, the well-known club located on Wyndham Street has now re-opened at the entrance of Lan Kwai Fong in the Basement of Century Square. The 6,000 square foot basement boasts two bars, state of the art screens and an impressive lighting setup. Privé also has top-of-the range Funktion-One speakers throughout guaranteeing the highest quality sound. The European influenced Moroccan design is spacious and lends itself well to the many VIP tables on offer. For those looking for a more intimate experience, a private room, equipped with its own screens and karaoke system is available.