Hong Kong’s Sneak Preview of the Chippendales at FINDS 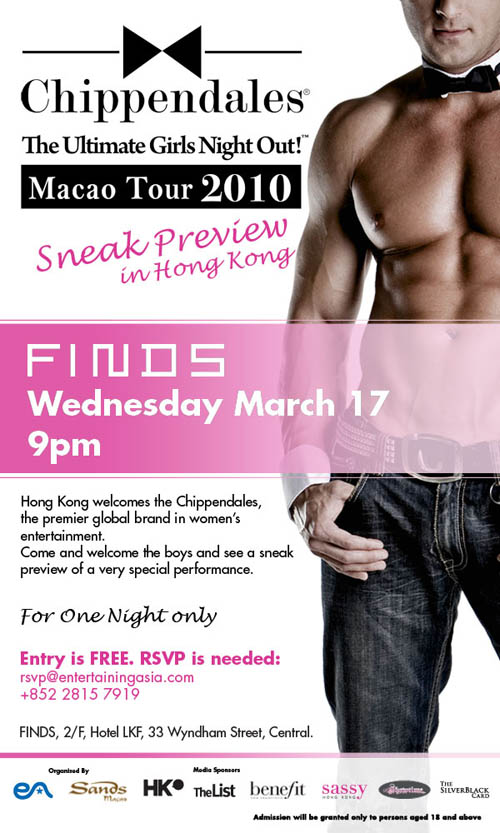 Hong Kong welcomes the Chippendales - the premier global brand in women’s entertainment – performing an exclusive sneak preview of their upcoming performances at Sands Macao, part of their “The Ultimate Girls Night Out World Tour.” Come and welcome the boys at the glamorous surroundings of FINDS on Wednesday the 17th of March, and join the party with HK Magazine, The List, Sassy Hong Kong, Benefit Cosmetics and Showtime Lingerie.

Capturing the perfect balance of sex appeal and tasteful teasing, is the combination that has solidified the Chippendales reputation and turned this internationally known production into a household name across the globe.  Eliciting waves of screams from their excited audience, the men of Chippendales dance and sing their way into the hearts of birthday girls, bachelorettes and girlfriends who just want to have fun. There is guaranteed to be something for every woman!

The world’s most recognized brand name in ladies entertainment, the Chippendales perform in over 25 countries, 800 cities and for more than 2,000,000 women each year.   Reinforcing their global appeal, the Chippendales have been resident for the past seven years in the custom-built, $10 million Chippendales Theatre in Las Vegas and, have been accorded the accolade “Best Male Strip Show” by the city’s Review Journal.

Chippendales is the premier provider of entertainment for women.  The company produces Broadway-style shows worldwide and licenses its intellectual property for select consumer products ranging from apparel and accessories to mobile content. The company also currently operates Chippendales.com and controls over 100 other domain names, providing an online lifestyle and entertainment destination for women. Chippendales was established in 1978 and has headquarters in New York, with offices in Las Vegas and London.

Catch some of the guys at FINDS on the Wednesday, then head over to Sands Macao for the full live show on the 19th and 20th March (Friday and Saturday). Tickets for “Chippendales Macao Tour 2010” are now on sale. Tickets can be booked online at www.CotaiTicketing.com, by phone on (853) 2882 8818 or (852) 6333 6660 and via HK Ticketing and Tom Lee outlets. Tickets are available in 2 categories at HKD/MOP 480 and HKD/MOP 280. The packages with round trip CotaiJet™ ferry tickets between Hong Kong and Macao will be at HKD/MOP 568 and HKD/MOP 368 respectively.