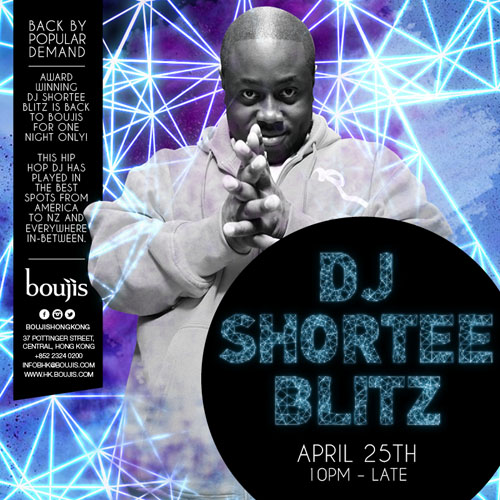 Friday 25th April. 10pm. London DJ, Shortee Blitz.
London DJ, Shortee Blitz is back to Hong Kong for one night only and will be spinning all night at Boujis.
Enjoy the best hip hop beats you know from the legendary Blitz!
Award winning DJ Shortee Blitz has been DJing since 1990 as an illegal house party DJ, as part of a sound system. When it got too risky, Shortee made the transition to rocking clubs. Around the same time he went on to DJ for London MC, Ty.
A couple years went by and he got the opportunity to be the exclusive mix DJ on the world famous Kiss FM’s resident Hip Hop show, which he eventually took over.
18 years down the line, he’s still doing his thing, helping to push Hip Hop music and the culture forward, whilst being true to the elements. Even though he has the love and respect from the Hip Hop community, he still gets busy in mainstream clubs on a professional level and has been for at least 14 years.
He has toured the globe from Europe, Australia, Africa, Canada, Greece, Cyprus, Papua New Guinea, Thailand, China, Kuala Lumpur, Kazakhstan, Russia, New York, Boston and everywhere in-between. This has enabled him to win various awards and wow audiences all over the world.
In addition to his work on air in the U.K.’s capital, Shortee held down a 2 year slot on the New York internet station, Alistradio.net where he brought his “Blitz Powermix” to the Big Apple to play the best Hip Hop from the U.K. and U.S.
Shortee’s production project ‘Unafraid To Fall’ is on the way…