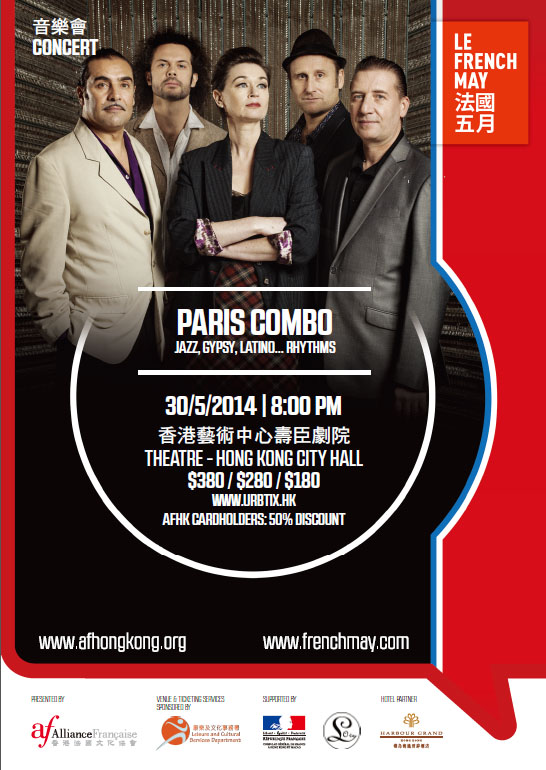 Description:
“… the marvelously eclectic Paris Combo, romped through jazz-tinged selections energized by the quirky vocals of Belle du Berry and Gypsy rhythms of Django Reinhardt-influenced guitarist Potzi.”
Don Heckman - Los Angeles Times
“Their collective brainstorms are sparked by everything from jazz to eastern European gypsy music to swing and early 20th-century standards. Paris Combo’s sense of play and the virtuosity of its members combine here to create definitively cool music.”
Billboard
Paris Combo is fronted by the mischievous vocals of chanteuse Belle du Berry, and has struck a positive chord with critics and audiences for their fun-loving mix of jazz, French pop, cabaret, gypsy, Latino and Middle Eastern rhythms.

Four albums and a decade spent touring the globe playing to enthusiastic audiences from Sydney to San Francisco and Berlin to Beirut have enabled Paris Combo to create its own unique world, establishing itself as one of the most piquant, intriguing groups on the international music scene.
In 1999, Paris Combo released "Living Room" in Europe and the United States. The album was a gold record with 100,000 albums sold by the end of 2000 followed by 120 concerts in the U.S., Europe, Asia and Australia.

After an exclusive comeback appearance at the Hollywood Bowl in 2011, Paris Combo began performing their new songs as well as favorites such as "Living Room" and "Señor" in France, Europe and the Middle East. For their visit to Hong Kong this year they will perform songs from their new album "5".
About Paris Combo
In the early 90s, du Berry, Potzi and François Jeannin first performed together, playing acoustically in the historic Berry Zèbre cinema in Paris’ Belleville district. Together they collaborated with French choreographer Philippe Decouflé at the closing ceremony of the Winter Olympics in Albertville. Du Berry met Australian musician David Lewis in 1994 when both were performing at the inaugural Cabaret Sauvage revue (now a popular venue in Paris) and it was not long before he joined the trio. They were then joined by bassist Mano Razanajato, forming what was to become Paris Combo.