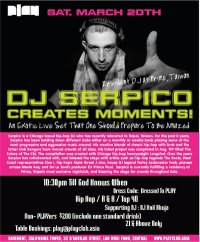 PLAY Proudly Presents:
DJ Serpico Creates Moments
An Exotic Live Set That One Should Prepare To Be Amazed


PLAY At The Right Spot !

Serpico is a Chicago based hip-hop DJ who has recently relocated toTaipei, Taiwan. For the past 5 years, Serpico has been holding down different clubs either on a monthly or weekly basis playing some of the most progressive and aggressive music around.

His creative blends of classic hip-hop with funk and the latest club bangers have moved crowds of all sizes.

His latest project was completed in Aug. '09 titled The Future of The Chi. The compilation was created with Chicago hip-hop heavyweight Longshot. Over the years Serpico has collaborated
with, and blessed the stage with artists such as hip-hop legends The Roots, West Coast representatives Zion I, hip-hop's triple threat J-LIve, house DJ legend Farley Jackmaster Funk, pioneer emcee Masta Ace, and De La Soul's producer DJ Prince Paul.

Serpico is currently fulfilling a residency at Primo, Taipei's most exclusive nightclub, and blessing the stage for crowds throughout Asia.

After starting out in the UK for 3 years, Anil moved to Hong Kong to continue his career as a DJ. DJ Anil Ahuja has forged himself as on of the most loved spinmasters on the Hong Kong club scene. At the age of 17 he was already on his way, splicing and slicing beats, fiddling and turning knobs. Today he has defined his sound
to a tightly mixed blend of tribal, iberican and progressive house - an infusion he dubs as "tribalgression".

His unique infusion of Progressive, Iberican and Tribal style has earned him a well deserved following amongst the punters of Hong Kong's club-land. Those who've experienced one of his
"preferably long sets" have rated him high on the party-o-meter. This has earned him a seat at the table of Hong Kong's top spinsters, earning him respect from fellow DJs alike.

Dj Anil Ahuja describes a typical set as one of “intoxicating, tribal progressive sounds" akin to sets by his heroes Lawler, Presta and Digweed. This has earned him resident status at The Opera House in Bournemouth, England in 1997 as well as being an exclusive DJ for the Cocktail parties such as the "Nation V" Event (Phuket 2005) & Decadence in Hong Kong.

Now with a successful track record of over 10 years of being one of Hong Kong’s most followed DJs, Anil has consistently allowed his skills and openness to music to grow till today. He has expanded his music diversity and branched out into urban styles. With the club scene booming in Hong Kong, the demand for his unique performance and interaction with local audiences has been phenomenal.