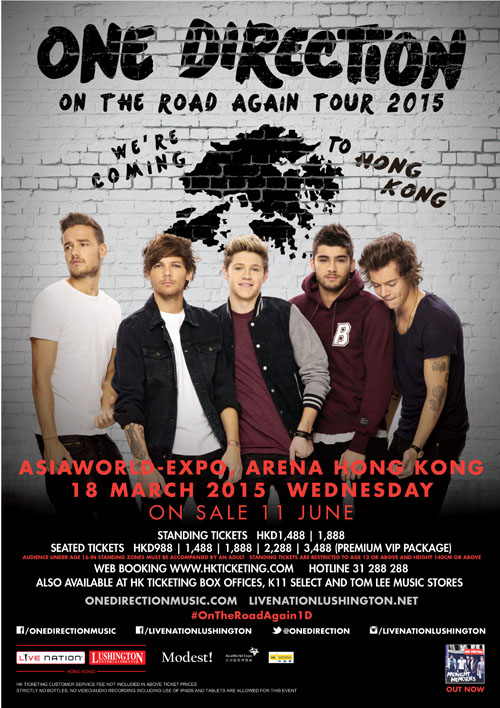 Live Nation Lushington is proud to announce ONE DIRECTION Live in Hong Kong for the very first time. The world’s number one boyband phenomenon will bring their “On The Road Again Tour” to AsiaWorld-Expo, Arena on Wednesday, 18 March 2015.

Tickets to this hottest show in town will be available from 11 June, 2014 10am onwards. Ticket prices are HKD1,488, HKD1,888 (Standing) and HKD988, HKD1,488, HKD1,888, HKD2,288 (Seated). Limited Premium VIP Package is HKD3,488.
One Direction are five talented, cheeky lads; Liam Payne, Zayn Malik, Harry Styles, Louis Tomlinson and Niall Horan. In just over three years together they have had an awesome 61 number ones, notching up an incredible 36 million sales worldwide, including 20 million singles, 11 million albums and over a million DVD’s.

The band came together at the boot camp stage of The X Factor 2010 and made it all the way to the final before finishing 3rd. Their global smash debut album, ‘Up All Night’, has sold over 5 million copies and reached #1 in 17 countries. Their BRIT Award winning debut single ‘What Makes You Beautiful’ entered the charts at #1 in the UK. In the U.S., ‘What Makes You Beautiful’ sold more than 131,000 copies in its first week, debuting at #12 on the Billboard Digital Songs chart. Their #28 debut on the Billboard Hot 100 marked the highest debut from a British Group since the Spice Girls in 1998. ‘Up All Night’ also debuted at #1 on the US Billboard 200 chart with over 176,000 copies sold in week 1 alone. This made chart history, as 1D became the first British group ever to debut at #1 in the US with their debut album release.

The band’s highly anticipated second album, ‘Take Me Home’ has also to date sold over 5 million copies worldwide and reached #1 in 37 countries. In the summer of 2013 One Direction made their movie debut with their massive hit 3D concert movie and documentary One Direction: This Is Us. The film has been a phenomenal success, topping the UK and US box offices and grossing an incredible $67 Million
worldwide.

Their third studio album titled ‘Midnight Memories’ was released globally on November 25 2013 and features the smash singles ‘Best Song Ever’ and ‘Story Of My Life’. The fastest-selling album in the UK in 2013, it shot to number 1 in an incredible 31 countries including the USA, UK and Australia. 1D are no strangers to big venues, having ended 2012 by selling out Madison Square Garden in less than 10 minutes. 2013 has been just as exciting for the boys as they took their Take Me Home Tour to Europe, America, Canada, Mexico, Australia, New Zealand and Japan, winning a BRIT Award, 2 American Music Awards, 3 Billboard Music Awards, 6 Teen Choice Awards and an MTV Video Music Award along the way.

2014 is proving to be just as exciting. They kicked off the year by winning 2 BRIT awards for ‘Best Video” and ‘Global Success’ and are set to release new single ‘You and I’ on May 25. As well as this, they have just embarked on the South American leg of their worldwide ‘Where We Are’ stadium tour, hitting stadiums in the UK, Ireland, Europe and North America next.

In the coming March 2015, Hong Kong fans will get their long-awaited opportunity to experience the band performing all their hits ‘live’ for the very first time.