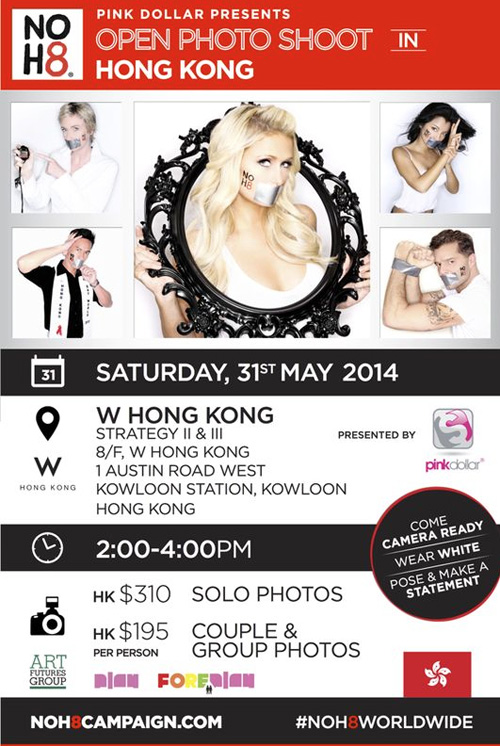 Pink Dollar is proud to present for the very first time in Hong Kong the internationally acclaimed NOH8 Campaign. NOH8 is a worldwide photo campaign promoting marriage, gender and human equality through the power of social media. The international collection of NOH8 ("no hate") Photos features subjects with duct tape over their mouth, symbolizing their voices being silenced by Proposition 8 in California and similar legislation around the world, with "NOH8" painted on one cheek in protest.

Over 35,000 NOH8 photos have been taken to date, putting a face to the fight for equality in cities and countries all over the world. Participants range from global celebrities the likes of Paris Hilton,  Ricky Martin, Liza Minnelli, Lindsay Lohan, and Kim Kardashian,  to everyday individuals like us who are equally important and critical for the success of the campaign. The concept was originally created by celebrities Adam Bouska and Jeff Parshley.

The NOH8 Asia tour will stop at Taipei, Bangkok, Hong Kong and Manila during its first visit to the far east.

Paul Ramscar, the founder and chief executive of Pink Dollar, is urging Hong Kong residents to show their support by stopping by the W Hotel on Saturday to have their own pictures taken. "Asia has an amazing opportunity now to help break the silence in this global campaign, and Pink Dollar, as Hong Kong's first and foremost social network for LGBT issues, is committed to making it a success."

About Pink Dollar
Pink Dollar serves as an events aggregator, a charitable platform and most valuably as a consultant for brands to tailor specific aspects of their offering for the LGBT market.
Listed businesses on the Pink Dollar app are able to issue digital coupons known as Pink Dollar m-coupons to the user base. The m-coupons mainly come in forms of discounts or special offers and can be redeemed at point of sale.

Paul Ramscar, the founder and chief executive of Pink Dollar, stated: “Pink Dollar is a strong advocate of corporate social responsibility policy and a donor to LGBT charities, NGOs and NPOs. We have been very encouraged by the support we have received locally and internationally.  We look forward to welcoming more approved partners on board and serving our users and clients in the future as we launch exciting new initiatives.”