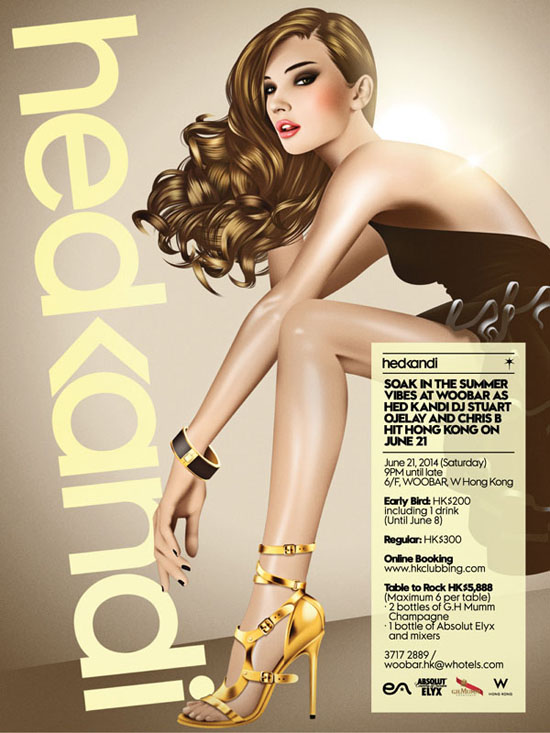 
This summer, the international mega brand Hed Kandi makes its exciting return to WOOBAR Hong Kong. Hot on the heels of DJ Phoebe d’Abo and saxophonist Emma Frampton who made their stunning appearance at W Hong Kong earlier this Easter, Hed Kandi resident Stuart Ojelay and percussionist Chris B will be taking to the decks this June 21st for one night only.

Having made their globally-recognized name off the back of their compilation album sales reaching 4 million to date championing their brand of eclectic beach music, Hed Kandi has long been throwing hedonistic parties every month in every continent. W Hong Kong, the 393-room hotel designed to celebrate the emerging cultural hub that is Hong Kong, takes the global W brand's philosophy and passion for music to new levels. Always on the hunt for the-next-best-thing makes it the global epicenter of exciting new names in entertainment, as well attracting world-established acts such as Tiesto and Carl Cox to the city - making the Hed Kandi and W Hong Kong collaboration an ideal match this year.

Headlining the second collaborative party this Summer will be Hed Kandi resident Stuart Ojelay hailing from the Midlands, who has been spinning for over 15 years and performed in every continent in the world. When headlining glamorous events in the likes of Brazil, Uruguay, Dubai and China, Ojelay mixes a blend of soulful deep house, sumptuous disco and main room anthems for intimate clubs, beach and pool parties to festivals, lighting up global dancefloors. Joining him on the line-up will be the young Chris B who juggles an international touring schedule with his solo productions on the likes of funky tech-house label Toolroom Records, seeing support from some of the world's biggest DJs including Eric Prydz, Dubfire, and Luciano. Since the tender age of 18, Chris has been globetrotting with his crew of numerous A-list DJs including Roger Sanchez, Chris Lake and Basement Jaxx for the last two years.

(from left to right) W Hong Kong Resident DJs – PARVENU and Ryan Ash
In support will be some of W Hong Kong's own residents, selected from our eclectic roster of talented local DJs. The electric producer/DJ UK duo, Damian Boylan and Jonathan Daltrey aka Parvenu known for pumping out upbeat house and tropical summer tunes will be stepping up to join the Hed Kandi stage. The winners of W Hotels x Burn Studios DJ Lab series in 2013, the duo have since been jetting to play various W Hotels the world over, as well as Hong Kong's massive Clockenflap Festival. Warming the dancefloor up will be Ryan Ash, who has been DJing for 15 years, starting his early career via Drum & Bass and since moved onto anything from Funk, Broken Beats and Nu Jazz to Deep House, Indie Dance, Electro and Dubstep. Besides also being a Hed Kandi headliner in Shanghai, he has played gigs for Cream, in Singapore and Myanmar and in his current hometown holds residencies at some of the finest clubs such as FLY, Le Boudoir and Honi Honi.

See you on the dancefloor for what's set to be an unforgettable night showcasing the finest in funky summer house vibes.

About Hed Kandi
in 1999, Hed Kandi has evolved from humble beginnings as a compilations brand into the phenomenon it is today - a globally respected music and lifestyle brand that is recognised all over the world for its music, events and unique brand identity. There are many parts to the Hed Kandi brand; of the most significance is its recordings division that manages the musical direction and programming for all of its compilation albums and events. It has, to date, produced over 100 albums and enjoyed in excess of 4 million album sales worldwide. Hed Kandi artists also tell stories of success with the brand’s first ever Top Ten hit in 2004 with a no.6 spot for Stonebridge ‘Put ‘em High’ and a succession of top ten hits from Booty Luv including ‘Boogie 2nite’ and ‘Some Kinda Rush’. Please visit WWW.HEDKANDI.COM for more information of Hed Kandi activity including albums, events, news, history and more.

About Stuart Ojelay (DJ)
Stuart has been an active part of the House scene for more than 10 years and after performing in every continent in the world, he’s a firm fixture in the Hed Kandi Global roster. From Vancouver, Cape Town, Macau, Dubai and Uruguay, to displaying his skills in front of 3000 people on NYE at Pacha, Florianopolis Brazil his skilled precise mixing of Soulful Warm Ups, Sumptuous Disco House to Main Room Anthems, combined with his effervescent style never fails to serve up hands in the air action on global dance floors. His talents do not rest and just behind the decks as he runs several successful promotions from his midlands base and pens a successful weekly Clubbing column for the UK’s biggest regional publication. On the production side, things are seriously starting to blow up! With many productions topping the Worldwide download charts and with him recently mixing, compiling and producing the latest Hed Kandi Taste of Summer album, there’s no sign of Stuart stepping off the pace!

About Chris B (Percussion)
Chris B is put simply, one of the hardest working and motivated young men to emerge out of the electronic music scene in years!

He juggles an international touring schedule to match most headline DJs, as well as a studio workload which has resulted in a top 10 artist album on Toolroom Records, multiple releases on high profile labels as well as contributing heavily to numerous Hed Kandi releases. Since the age of 18 Chris has been globetrotting with numerous A-list DJs including Roger Sanchez, Danny Rampling, Chris Lake and Basement Jaxx, providing beats at some of the most high profile events on the planet!

As a producer his records have been championed by the music press and DJs worldwide, including airplays on Capital Radio, Radio1xtra, Kiss FM. Chris is also a supreme live performer supporting superstar DJs from across the spectrum such as Eric Prydz, Mark Knight, Louie Vega, Dubfire, Roger Sanchez, Luciano and Sander Kleinenberg!

Not only has his album "New Direction" been in the top 10 but was also followed up with multiple top 20 releases. Chris has also produced and written music for movie soundracks and major label artists in the UK&US.

As well as his extreme talents in his studio Chris B definitely gets the crowd jumping, dancing, sweating and vibrating!!