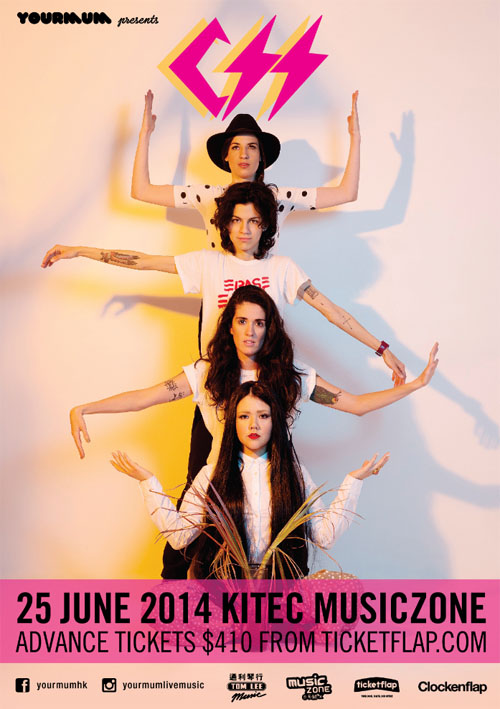 CSS (Cansei de Ser Sexy “I Got Tired of Being Sexy”) are a new
wave, synth-pop, indie rock band from Sao, Brazil. They shot to
international success in 2006 being labelled as part of the
explosion of New Rave bands. Their debut album “Cansei de Ser
Sexy” received international release by Sub Pop/ Sire and was
almost universally lauded, ending the year in many music
magazines best records of 2006 lists, including Uncut, NME,
and Q. The album won the 2007 PLUG Independent Music
Award for Best Punk Album.

The fourth album by CSS, last years “Planta” is produced by TV
on the Radio’sDavid Sitek - who has also worked with bands
such as Yeah Yeah Yeah’s, Liars,Foals & Little Dragon. It sees
CSS with their feet firmly in the quirky catchy new wave indie
electro pop format. The All Music Guide review said, “…loopy,
poetic imagery is carried throughout all of Planta, and helps
make it one of CSS’s most creatively fertile and enjoyable pop
organisms to date”. And The Quietus review; “The tracks crackle
and shimmer with an abandon not heard since their debut.”
At recent shows CSS have played songs from throughout their
entire catalogue, including early classics like “Artbitch”, “Let’s
Make Love and Listen To Death From Above” and “Music Is My
Hot, Hot Sex”.