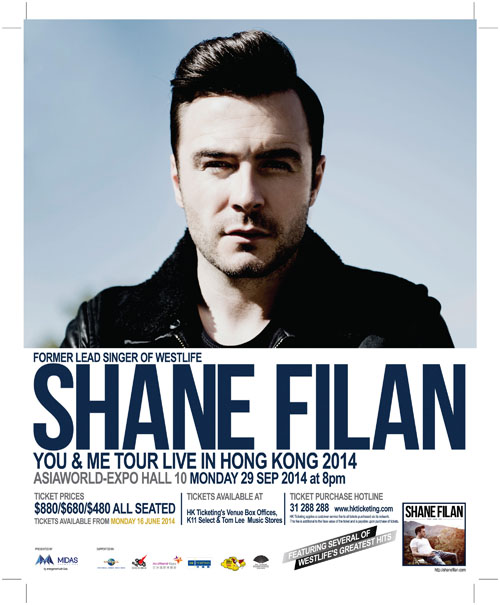 Shane Filan, one of the lead vocalists of super group and worldwide phenomenon that is Westlife, is coming to Hong Kong this autumn. This will be Shane’s first ever show in Hong Kong after the Irish group’s fond farewell tour back in 2012. In celebration of the release of his debut solo album, Shane is going on a world tour with Hong Kong being one of his stops - Shane Filan You & Me Tour Live in Hong Kong 2014 will be held on 29 September 2014 at the AsiaWorld-Expo.

Born in Ireland in 1979, Shane Filan found his passion in music at a young age. Together with school mates Kian Egan, Mark Feehily, and later joined by Nicky Byrne and Brian McFadden to form Westlife. Their eponymous first album was released in 1999 and shot the band to fame.

Ten albums and over 50 million sales later, the band came to an amicable split with a wonderful, sell-out farewell tour in 2012 after which Shane decided to embark on a solo career. His first solo album You & Me was released in November 2013.

Shane’s new album is way more than ballads that Westlife has come to known for. The record is dominated by up-tempo and mid-tempo songs, a reflection of his own record collection, mixing pop, soul, country and even a hint of traditional Irish music. With this first solo album, Shane emerges as a pop writer to be reckoned with. Shane chooses the very first song he wrote, the catchy Everything To Me, to be his first single.

Shane Filan’s first solo gig in Hong Kong, featuring several of Westlife’s greatest hits, is definitely not to be missed! Brought to you by Midas Promotions, Shane Filan You & Me Tour Live in Hong Kong 2014 is held on 29 September 2014 at AsiaWorld-Expo. Tickets to the show are on sale through HK Ticketing and Tom Lee Music Stores (www.hkticketing.com; tel: 31 288 288) from 16 June 2014.