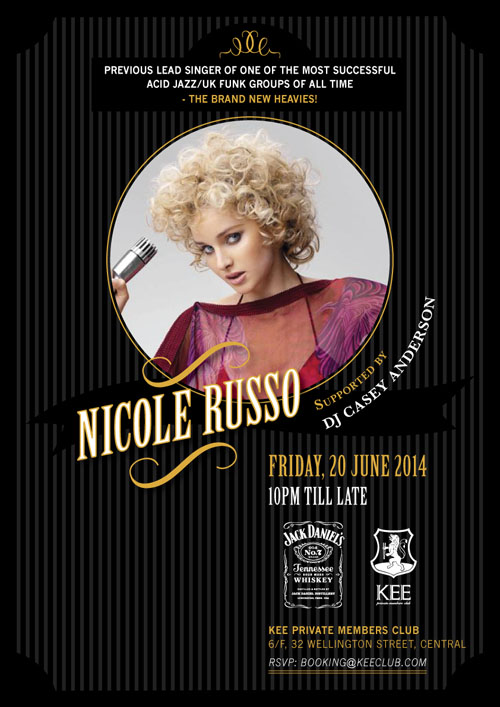 
Short description of the night, including genres of music to expect:

Nicole Russo -
London-born Nicole Russo's has performed worldwide for many years as firstly a singer songwriter, then record producer for some of the top bands in the world, notably The Brand New Heavies, The Artful Dodgers and the legendary Eg White. She has also worked with Lauryn Hill's and Janet Jackson's songwriters to name a few.

Nicole's career was launched in 2002 amid record company hype claiming her to be the UK’s answer to contemporary US R&B stars such as Alicia Keys and Sunshine Anderson. The daughter of 60s singer and comedian Jerry Stevens, Russo was exposed at an early age to soul and funk legends performing on her father’s television show.

In 2013 the American-born DJ released his first tracks on Italian label Opilec Music (alongside inspirations like Derrick May and Todd Terje) before joining fellow Hong Kong DJ Frederic Neve to launch Typhoon 8 Records, where he has continued to release deep, dubby techno and house. Scoring his first DJ residencies at leading underground spots Yumla and Bassment, since 2009 he's played the closing slot at the city's Clockenflap Music Festival twice, and after founding the party collective Humdrum he frequently hosted and supported international guests like Deetron, Dirt Crew, Till Von Sein and Ryan Elliott.