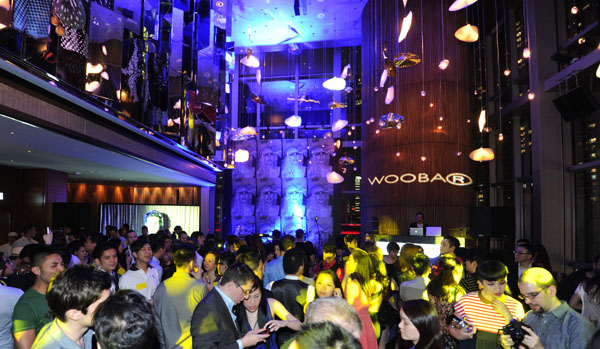 NO MUSIC. NO LIFE.

Hong Kong music is not all about pops, ballads and heartbreaks. There are actually many amazing rising stars in every type of genre possible waiting to be unveiled. So starting from July, W Music Curator Flora YTW along with music powerhouse SONY Entertainment will be showcasing up-and-coming talent every Friday night at WOOBAR. Let music speak for itself.

“Music has always been a major part in W Hong Kong, as it’s the music that brings such energy and vibe to the hotel experience,” shared W Music Curator Flora YTW. “For this reason, we are always on the hunt for the-next-best-thing to make our hotel the global epicenter of entertainment in Hong Kong. After hosting many world-established acts such as Tiesto and Carl Cox, we believe by diversifying our music with live acoustic music through SONY Entertainment, will certainly engage a wider spectrum of trendsetters.”

Being a good band is one thing, but being a good live act is what makes a lasting impression. With this in mind, SONY has hand-picked several artists to form O.U.R. Works that aims to inspire people with the basics of music and life – Lil’ Ashes, Lillian Wong, Shandy Gan, Trekkerz Phil Lam and Jason Chan.

Having performed in Clockenflap Music Festival, Lion Rock Music Festival and Strawberry Music Festival in 2013, Lil’ Ashes touches many hearts with its soothing guitar and distinctive female vocals. Lillian Wong on the other hand catches the public’s attention with its piano pop-rock style of music, which won her several awards in 2013 such as Commercial Radio 2013 Bronze New Artist award as well as Metro Radio 2013 New Female Singer / Songwriter Award. Shandy Gan, famous for her Bossa Nova style of music, cleanses the souls of her audience with relaxing tunes such as “I remember the…”, “Grandy Yeah Yeah”, “Cold Cold Night’ and more.

Trekkerz, a live band group that is composed of three college friends from Hong Kong Academy of Performing Arts, becomes a crowd-favorite with its wide range of music styles such as contemporary, chanson, pop and more. Their first single “原地出發” reached #3 on iTunes Chart and #2 on Commercial Radio. The Canadian-born Chinese singer Phil Lam with 3 singles up his sleeve, brings forth to the stage his powerful and energetic tunes that are sure to get the audience excited. Last but not least, singer-songwriter Jason Chan has been stealing hearts of music lovers with his charismatic love songs and last year he even incorporated his own unique vibes in his first-ever concert “Tales”.

To celebrate the LIVE LAB music series, Flora FTW, W Hong Kong’s W Music Curator will be working very closely with SONY to bring about a glamorous launch on July 25 at WOOBAR from 8pm until late. Not only all the participating artists will be performing, popular local singer Jason Chan will also be joining the fun. Stay tuned on our W Hong Kong Facebook (www.facebook.com/whongkong) for more details.
Be ready to indulge in live acoustic tunes and say hello to the bands, artists and producers set to seduce your ear drums.

About W Music Curator – Flora YTW
Born and raised in London, Flora YTW plays House, Techno and everything in between. Her immense talent in music and DJ allows her to leave her mark around the globe, such as London, New York, Tokyo, Ibiza and Copenhagen. Working over 6 years overseeing the music section in Dazed and Confused, one of the most influential and successful independent magazine titles, Flora has developed a strong eye of the hippest music happenings and rising artists in the world. Besides heading music in Dazed and Confused, she also runs Ocular Sound sharing her mixes and has contributed to the likes of Juno Plus, Resident Advisor, the Phonica blog, Monocle and more. Now as W Hong Kong’s Music Curator, Flora will take music up-a-notch by gathering the town’s star DJs to WOOBAR and devising an extensive line-up of edgy music programming.
Listen to her music here: http://floraytw.tumblr.com/ or http://ocularsound.com/947-2/