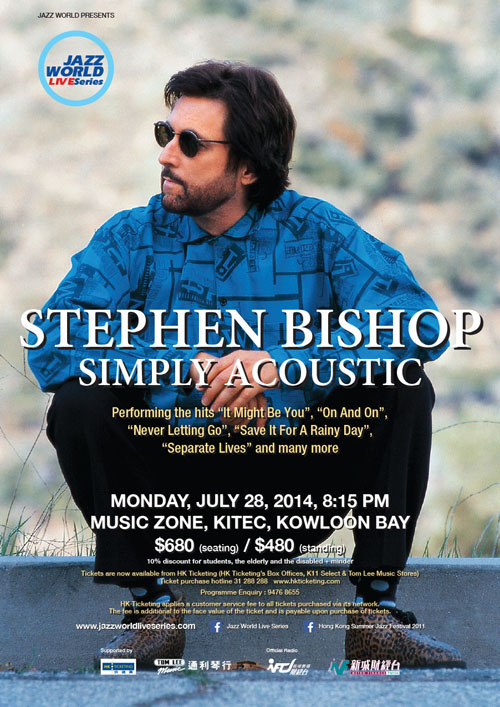 At the age of thirteen, Stephen Bishop found himself at a crossroads. A clarinetist with hopes of becoming a History teacher, he was forever changed after watching the Beatles one night on "The Ed Sullivan Show." He convinced his brother to buy him an electric guitar. He bought a "Mel Bay" chordbook and began to learn to play guitar and make up chords as well, writing his first song, "Surf’s Turf," a pathetic sounding instrumental. He formed a band called "The Weeds" and began to play at local fraternity parties incorporating his own original songs with various songs from top 40.

The Weeds won 2nd place at the Claremont Battle of the Bands, prompting one of the judges to explain that "Stephen Bishop is going to be a big songwriter someday!" Determined to fulfill that prophecy, Stephen made the trip to Los Angeles. He walked the streets with his $12 acoustic guitar, playing songs for various publishers in Hollywood... eventually landing a publishing deal at $50 a week for E.H.Morris Publishing. One of his songs was recorded only to be followed by a long wait...many years went by. At one point, Stephen considered leaving L.A. to return home and work for his Dad’s Insurance company. Through a good friend, Art Garfunkel heard some of his new songs and recorded two of them on his Gold recording, "Breakaway."

He started playing around town singing his songs in person for artists like, “Barbra Streisand...Bette Midler...Diana Ross." Shortly thereafter, he was signed to ABC Records who released his first album, "Careless." His two hits from that album were, "Save It For a Rainy Day," and "On and On." Soon the album went gold, as well as his next album, Bish.

He sang the hit theme, "It Might Be You," from the movie, "Tootsie," as well as writing and/or singing 13 other films including, "Animal House" and "Separate Lives." from "White Nights." His songs have been performed by artists such as: Phil Collins, Eric Clapton, Barbra Streisand, Art Garfunkel, Steve Perry, Stephanie Mills, Kenny Loggins, Johnny Mathis, Phoebe Snow, David Crosby, The Four Tops, Aswad and Pavarotti.

He appeared as the "Charming Guitar Player" in "Animal House," wherein John Belushi slammed his guitar into smithereens in the Toga Party scene. He appeared as, "Blue London," in Henry Jaglom's, "Someone To Love." Bishop also appeared in "The Blues Brothers" as a State Trooper. This last June, he performed at the Library of Congress. In September, he performed at the Waldorf-Astoria in New York for an event for the U.N.

Stephen was nominated for two Grammys and awarded an Oscar nomination for his song, "Separate Lives". His newest album is entitled, "Be Here Then" and was released in January 2014. His website is www.stephenbishop.com
. In Eric Clapton's autobiography, he mentions Stephen as one of his favourite songwriters.

Tickets go on sale June 6 via HKTICKETING outlets and at all Tom Lee Music Stores or visit
www.hkticketing.com
or