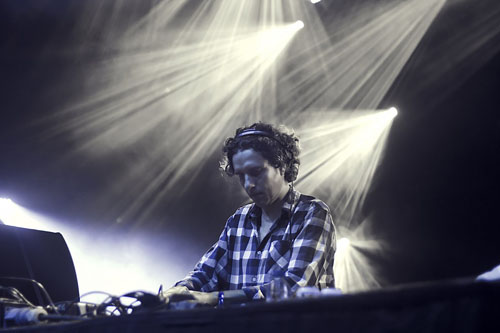 Get the bottles popping and champagne glasses ready for the birthday bash of The Mira Hong Kong. The city’s first and flagship Design Hotels’ property will be celebrating in electrifying style at open-air Vibes with Guest DJ, Compuphonic (Belgium) followed by an after-party till wee morning hours with temperamental live band featuring Bianca Adriao (Portugal). Every fifth ticket purchased online will receive a bottle (750ml) of crisp and cool Perrier-Jouët Champagne on the house.

Be part of it all and party to hedonistic house hits by Compuphonic, such as entirely positive epic single “Sunset” which to date gathered over 5 million hits on YouTube and became the core of countless remixes by the likes of Aeroplane.


Bio
“We are the music that we create” and this has never been more true than with “Sunset”, Compuphonic, alias Maxime Firket’s new maxi single on the prestigious Berlin ‘Get Physical’ label in anticipation of his debut album in 2013. For the occasion Maxime got together with American soul singer/violinist Marques Toliver (Bella Union, Bat For Lashes, Grizzly Bear, Holly Miranda, Mechanical Bride), to create a piece of hedonistic house that is entirely characteristic of his style. Spontaneous, positive, natural, open to large spaces, ambitious but always accessible. “All these elements are the common denominator of my music”, explains Maxime, who brought out his first maxi singles on the Belgian ‘Dirty Dancing Rccordings’ label in 2005. “In my productions, I naturally search for originality, but also simplicity, efficiency, emotion and some sort of positive melancholy.”

Born in 1983 in Liège, Belgium, Maxime Firket grew up surrounded by music. He studied music theory and classical music at the Academy and did not choose the easy route by opting to study the cello. “A demanding and monodic instrument which forces you to find the right sound and the right note to make yourself heard. My cello background is still useful to me today.” As an adolescent, he dreamt of playing in a rock group, but also discovered Kraftwerk, Depeche Mode, Front 242 and Detroit techno. After having created his own studio and put together a few mixes on a Roland Compuphonic synthesiser (yes, that’s where the name comes from…), Maxime soon found himself behind the decks at Dirty Dancing nights in Brussels and recorded his first tracks for Dirty Dancing Recordings. In 2006, his reputation exploded on the dance floor with the groovy “Emotion”, produced in collaboration with Tiga and released on his label ‘Turbo’. !

Maxime has his finger in lots of different pies and is equally at ease at festivals as in the studio. In addition, Compuphonic has done different remixes for Crystal Fighters, Martin Solveig, The Presets, Arsenal and dEUS which are played by the crème de la crème. In 2008, he broadened his horizons due to his involvement with the Belgian rock group Montevideo for the album MVSC that they went on to promote throughout the country. It’s in the Vervier countryside, in Theux, that Maxime heads up the Union Match label. The label produces his music along with that of Fabrice Lig, Spirit Catcher, Kolombo, and Ante Perry. His mind is constantly roaming but he has his head firmly screwed on, Maxime Friket is guided by the same calm force which characterises his music. And the trip is far from over… !